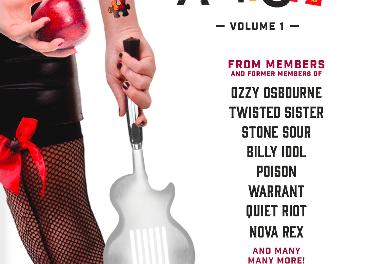 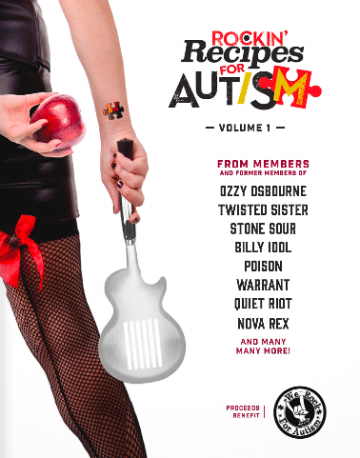 “Rockin’ Recipes for Autism – The FIRST cookbook consisting of recipes submitted by your favorite rock stars designed to support autism awareness and acceptance!

We have all heard about Autism. Some of us may even know someone who falls somewhere on the autism spectrum. First, here are some facts:

According to CDC, 1 in 68 American children as on the autism spectrum – a ten-fold increase in prevalence in 40 years. Careful research shows that it’s increase is only partially explained by improved diagnosis and awareness. Studies also show that autism is four to five times more common among boys than girls. An estimated 1 out of 42 boys and 1 in 189 girls are diagnosed with autism in the United States.

And we haven’t forgotten all the fans of rockers. Have you ever wanted to have dinner with a rock star? Here’s the next best thing. We have collected recipes from rockers and others in the music industry and now we bring their favorites direct from their table to yours. Some have shared their favorite family recipe along with a great memory and others may have contributed a fun and easy recipe from the road.

All of this has been done to benefit the “We Rock for Autism”, an officially recognized non-profit 501 (c)(3) organization and so we thank you for being a part of this. Rock on!

A portion of all proceeds will be donated to WE ROCK FOR AUTISM to help provide music therapy services to children on the spectrum.”