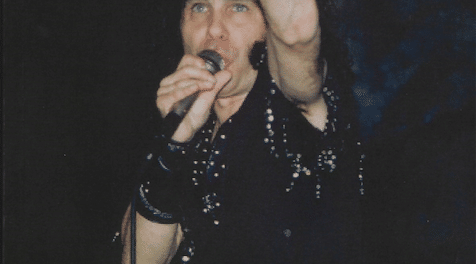 Granted, author James Curl‘s book Ronnie James Dio: A Biography of A Heavy Metal Icon dates back to May 1, 2018 but Sleaze Roxx had neglected to announce the publication of this book, which details the late great Ronnie James Dio‘s life.

“Ronald James Padavona began playing music in 1950s doo whop bands as a bass and trumpet player. He eventually found his voice, changed his name and took command of the microphone. And thus a rock ‘n’ roll legend was born. During a career that spanned six decades, Ronnie fronted such legendary bands as Elf, Rainbow, Black Sabbath, Dio and Heaven & Hell. Along the way, he shared the stage with some of rock ‘n’ roll’s most renowned players like Ritchie Blackmore, Tony Iommi, Vivian Campbell and Vinny Appice.

In the 1980s, Ronnie rose to superstardom with classic albums like Holy Diver, Last In Line and Sacred Heart. With his medieval-laden lyrics, powerful vocals and larger than life stage shows, he gained legions of adoring fans and was loved the world over. By the 2000s, he had become an elder statesman and a full-fledged heavy metal icon.

This book chronicles Ronnie’s life from his humble beginnings in Cortland, New York, up to his time in Heaven & Hell and his eventual passing in 2010. In the book, you will get a glimpse into the life, music and passions of one of heavy metal’s all-time greatest singers. You will hear stories and memories from Ronnie’s cousin Bill Padavona, as well as his high school friend Ralph Miller and early band members David “Rock” Feinstein, Mickey Lee Soule, Tommy Rogers, Doug Thaler and Dick Bottoff. In addition, there are interviews and accounts from numerous people who knew Ronnie including Vivian Campbell, Claude Schnell, Rowan Robertson, Jeff Pilson, Gary Hoey, Tracy G and even Ronnie’s personal hair dresser Joey Belfiore.”