Night Ranger guitarist Brad Gillis may well have had one of the most difficult gigs in the world back in 1982. Gillis was brought in to replace guitarist Bernie Tormé who had previously briefly replaced Randy Rhoads as Ozzy Osboune‘s guitarist. Rhoads had unexpectedly passed away in an airplane on March 19, 1982 at the age of 25. Tormé‘s tenure with Ozzy was quite short and only lasted a handful of shows. Gillis was subsequently hired and fulfilled the rest of the tour’s obligations and ended up playing on Osbourne‘s live album Speak of The Devil. 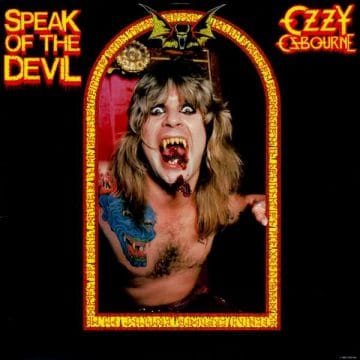 The following message was posted in part on Gillis‘ Facebook page yesterday (on September 26, 2022):

Yes, today and tomorrow (26/27 Sept. 1982) will be the 40th anniversary recording of the ‘Speak of the Devil’ live record at the Ritz in NYC consisting of all Black Sabbath material.

The album was released one month later on Jet Records and certified Gold soon afterwards!

The band consisted of:

Sleaze Roxx stated the following in its review of Speak of The Devil: “Plans to release a live recording with Rhoads were scrapped after his death and with an obligation to provide two more albums left on his contract, a plan was constructed to record a pair of nights at The Ritz with the band line-up of Ozzy, touring members Rudy Sarzo (bass), Tommy Aldridge (drums) and Gillis. Tracks from the shows (as well as from a rumored non-audience run-through earlier the afternoon of one of the shows) were produced, engineered, and mixed by Max Norman and released in late 1982 as Speak Of The Devil. Despite being listed as performers on Diary Of A Madman, this would mark the official debuts for Sarzo and Aldridge on an Ozzy album and Speak Of The Devil would end up being Gillis’ sole appearance on an Osbourne release.”