Night Ranger guitarist Brad Gillis was recently interviewed by Mitch Lafon for the Rock Talk with Mitch Lafon podcast. Night Ranger will be the special guest on a co-headlining tour between Whitesnake and Sammy Hagar & The Circle throughout the United States of America from July 9, 2020 to September 20, 2020. 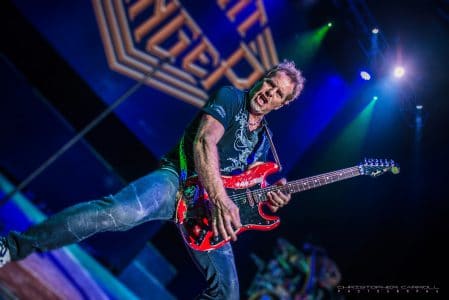 In terms of Night Ranger‘s longetivity, Gillis opined (as transcribed by Sleaze Roxx): “Yeah man, that’s a tough call because first of all, you’ve got to get along. You’ve got to dump the egos. You’ve got to you know — luckily, I consider ourselves not really an A band, but basically a glorified B band we’ll call it. I think we’re like three, three or four hits shy of being an A band. But it is what it is and we’ve sustained throughout our career. You know, we started out opening when we got a record deal, really in ’83 opening for KISS and you know, we did ZZ Top and Cheap Trick and every band you could imagine, we were opening for. And then we had “Don’t Tell Me You Love Me.” It was out. It did real well on MTV when it first came out. And then you know, we released the second record Midnight Madness and it had “(You Can Still) Rock In America” on it, which did real well on MTV, radio, and then the magic song that sustained our career called “Sister Christian.” So boom! All of a sudden, we went to headlining status and in about 1984, we started headlining all through the ’80s and then we split up towards the years because we had been doing 250 shows a year for quite a few years all through the ’80s. We were all fried basically. And then next thing you know, the ’90s come and here comes Nirvana.”

Wikipedia summarizes Night Ranger‘s musical career as follows (with slight edits): “Night Ranger is an American rock band from San Francisco formed in 1979 that gained popularity during the 1980s with a series of albums and singles. The band’s first five albums sold more than 10 million copies worldwide and have sold 17 million albums total. The quintet is best known for the power ballad “Sister Christian”, which peaked at No. 5 in June 1984.”

Interview with Brad Gillis by Rock Talk with Mitch Lafon on March 6, 2020: