In an interview with NME, Aerosmith guitarist Brad Whitford was asked a number of questions surrounding the future of the band. 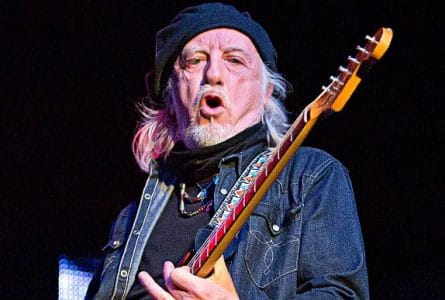 The following are excerpts from the article / interview done by NME.

Speaking to NME about why they chose now to end the band, guitarist Brad Whitford said: “Oh gosh, I’m not really sure. I don’t know, I think it was a general business decision, between the promoters to the management to the band. I don’t actually feel like we’re gonna be shutting the whole thing down at the end of it, but I think there’s a lot more life in the band. But, I guess you’ve got to start somewhere. So, we’re just starting to put the farewell label on things.”

When asked if the band could yet record new material, he replied: “That is a very good question. We haven’t been in the studio in a while, and I think we’re gonna be in the studio a little bit next month. We’ll have a better idea of it all, when we get together and do that – of whether we’re gonna record any new music. I know we would like to. And I know that we probably have quite a bit of music that we’re sitting on. Whether we actually follow through on that, how much we’re gonna do, whether it would be a couple of songs or more, is yet to be seen, but it sure would be fun!”

He continued: “I’d say the band is playing really well, people are writing a lot, there’s a lot of music that’s being created on the side-lines, in home studios and all that sort of stuff. It would be fun to just have something new to do. We’ve just got to take it organically, if it feels good we’ll go ahead and do it.”

You can read the rest of the article at NME.