Aerosmith and Whitford St. Holmes guitarist Brad Whitford was recently interviewed by Metal Rules and he was asked about Aerosmith‘s status and touring without Steven Tyler in the line-up. 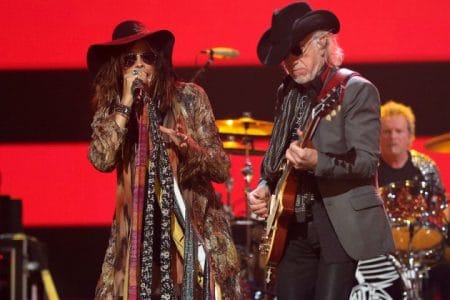 The following are excerpts from Metal Rules‘ interview with Whitford:

Robert: You’ve always been a straight shooter when I have spoken with you in the past, does Aero have another CD in them or will the next tour be Aerosmith’s retirement tour?

Brad Whitford: I really don’t know. There are a lot of musical ideas floating around as Joe has a bunch. It’s just a matter of us getting together and developing it and whether that’s going to happen we just have to wait and see.

Robert: With AC/DC going on tour with Axl Rose, does this open the door to Aerosmith reconsidering a short tour without Steven and possible some guest vocalist?

Brad Whitford: Absolutely, we have considered it but whether it will happen I don’t know. I think it would be great.

Brad Whitford: A lot of people, everybody from Myles Kennedy to Axl [laughing]. We had a bunch of people a while ago like Sammy Hagar. It would be a lot of fun.

Robert: Does all the turmoil with Aerosmith ever get old where you just roll with it?

Brad Whitford: There is still a lot of turmoil and can be frustrating. It should be easy. The whole thing started because of the music, if the focus was right there everything would be fine, but we don’t [laughing]. Let the drivers drive and let the music happen everything will fall into place. We get caught up into a lot of silly stuff.