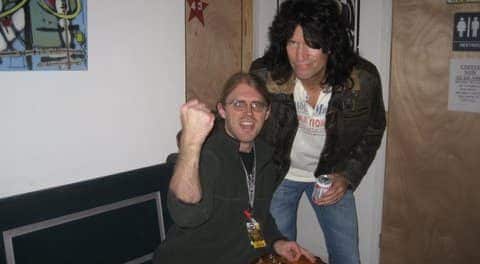 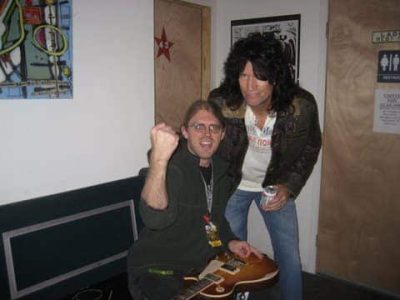 Cook goes on to say (as transcribed by the podcast Non-Stop Rock Talk with Tyson Briden with slight edits):

“The first time I actually heard Black N’ Blue — the very first time I ever heard a song by them — was [when] I got to be Tommy Thayer‘s guitar tech at the Oregon Music Hall of Fame. My friend Tom Holland and my other friend, Kevin Rankin — they kind of like — I’d been playing [in] Tommy‘s brother’s band — John Thayer, and he has his own band and I was playing in the band. Those two guys, they were like, ‘Hey, do you wanna be guitar tech for Tommy? He’s coming do the Oregon Music Hall of Fame thing.’ I was like, ‘Yeah, yeah. I’ll do it.’

Because I got to do that, I was setting up Tommy‘s guitar amp and getting his tone right and everything, [and] following his specs that his guitar tech had sent me. And so I just kind of played the opening riff of “Riff Raff” by AC/DC. Yeah, and that was like fishing in a barrel because everybody in the band jumped on that and started playing the song with me. They played “Riff Raff” with me, and I was just like, ‘Whoa!’ It as just like slapped into gear. It was unbelievable how tight they were playing that song. And I’m just like, ‘Wow! What a great band!’ I really respected them and their playing ability. That was the first time I played with Black ‘N Blue. That was 2010 and then three years later, I got the gig. It’s kind of a weird coincidence.”

You can listen to the interview with Brandon Cook on the podcast Non-Stop Rock Talk with Tyson Briden at Buzz Sprout‘s website.