Former Devil City Angels frontman Brandon Gibbs was recently interviewed by Chuck Shute for the Chuck Shute Podcast and he was asked about the social media “battle” that he and former bandmate Rikki Rockett engaged in back in March 2019. 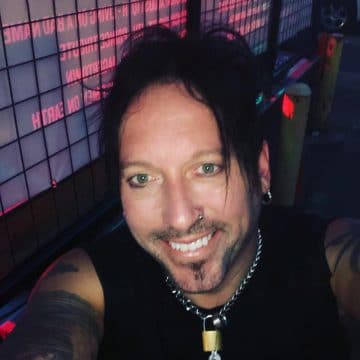 On March 9, 2019, Sleaze Roxx posted an article titled ‘Stryper singer Michael Sweet and L.A. Guns members Tracii Guns and Shane Fitzgibbon form Sunbomb’ via its Facebook page. One reader posted a comment inquiring to singer Brandon Gibbs about what was the status of the Devil City Angels, which initially included guitarist Tracii Guns. Gibbs advised that he was no longer in Devil City Angels as he posted the following comment: “Hey all! I moved on… Fun band but inactive” and Sleaze Roxx posted an article titled ‘Singer Brandon Gibbs moves on from Devil City Angels as finds band inactive’ via Facebook in that regard. Gibbs‘ comment appeared to have caught Rockett by surprise as the drummer posted the following comment on March 10, 2019 via Facebook (which was subsequently removed): “The band went inactive because I got cancer. These guys couldn’t wait around. I’m clear now, so maybe it’s best to move on without Brandon Gibbs?” This sparked a few back and forth comments between Rockett and Gibbs.

Devil City Angels released one full-length self-titled album back in September 2015 that finished at #6 on the Sleaze Roxx Readers’ Top 20 Albums of 2015.

In terms of whether they have kissed or made up since then, Gibbs indicated (as transcribed by the Chuck Shute Podcast with slight edits): “You know, I mean we’re both passionate individuals and I, I hate almost being asked sometimes about the group because it, the band was kind of lightning in a bottle and it, and it went away, um, rather quickly as it came in. And there is sometimes no, no easy way to say it, that it’s inactive and you have to do things. It comes out, it comes across like a slam, you know what I’m saying? And it isn’t meant to be that way.”

In regard to Rockett taking offence to Gibbs‘ comments, the latter advised: “He did. He took offense to it and you know, that’s the computer, and it’s texts, I mean I had been, you know, since, since the Devil City Angels kind of stopped. I have been doing nothing but my own thing and enjoying it. So it really, to me, it didn’t seem like it was something that was that surprising, I guess, that, that, you know, it’s inactive and we have to, like, I’m working on this right now and I truly didn’t mean it to upset him. And when he, uh, when he read that, I think it did. And um, and you know, it’s a bunch of garbage cause him and I are, you know, we’re, we have so many common interests and things like that. We just put it to bed and it’s like, alright, I misread you. Hey, I mean, him and I do that a lot. And that’s, you know, when you’re around, not a lot, but you know, we’re passionate people.”

You can listen to the interview with Brandon Gibbs by the Chuck Shute Podcast via the Buzz Sprout‘s website.