Brandy and The Butcher to release new album in spring 2022

Brandy and The Butcher consisting of lead vocalist Elizabeth Hale, guitarist Jay Matheson, drummer Kevin Brewer and bassist Roger Shattuck will release a new album in the spring of 2022. 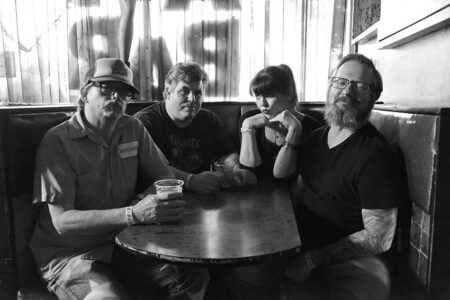 “Retro loving hard rockers Brandy and The Butcher are preparing to unveil their new LP scheduled for the release in Spring of 2022. Drawing upon various genre influences from punk, notably artists such as The Cramps, through to traditional metal, the album explores the different sides of Brandy and The Butcher’s sound.

“Brandy and The Butcher is proud to announce the release of our second full length LP. It will have some surprises in store for the fans of our first record as we explore some new sonic territory. Full blown fuzz and a few heavier songs will appear along with our straight rock and punk tunes.”

Initially forming as an ensemble and dropping their EP Pretty Girls in 2018, Brandy and The Butcher saw their first tour cut short due to the pandemic. After releasing their debut full length released in August of 2020, the new LP follows the quartet as they progress in developing their music. Delivering high energy and dynamic rhythms, Brandy and The Butcher’s distinctive rock n roll edge mixed with seductive vocals produces a raw, powerful sound.

The first single “BGF” will be released on January 14th.”