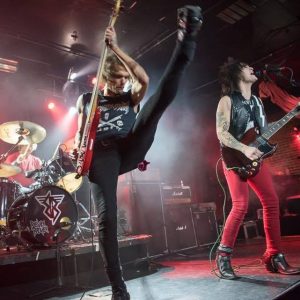 “One of my favourite sleaze bands was always Cats In Boots. Remember them? “Pistol Grip Baby” could have fit on 1988’s Kicked And Klawed any day….

So, have you figured out how I’m going to summarize Breaker Breaker yet? I’ve intentionally gone overboard on hyperbole and grammatical impurities in this review because that’s what this band delivers — an over the top performance that has taken my 2016 playlist by storm. Wreckin Machine is premium sleaze, along the same lines as 5 Star Hooker or Löve Razër that Sleaze Roxx has looked at this year already. Sure the mix might be a little rough, and the music a little loose, but hey… who cares? I’m loving this band, and can’t wait to find out what they do next.”