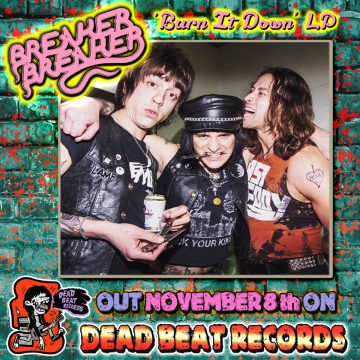 The following message was posted in part on Dead Beat Records‘ Facebook page on October 24, 2019:

Sleaze Roxx stated the following in its review of Breaker Breaker‘s album Wreckin’ Machine: “So, have you figured out how I’m going to summarize Breaker Breaker yet? I’ve intentionally gone overboard on hyperbole and grammatical impurities in this review because that’s what this band delivers — an over the top performance that has taken my 2016 playlist by storm. Wreckin Machine is premium sleaze, along the same lines as 5 Star Hooker or Löve Razër that Sleaze Roxx has looked at this year already. Sure the mix might be a little rough, and the music a little loose, but hey… who cares? I’m loving this band, and can’t wait to find out what they do next. Check it out and buy the album on Bandcamp.”