Bret Michaels announces Poison tour for the summer of 2016 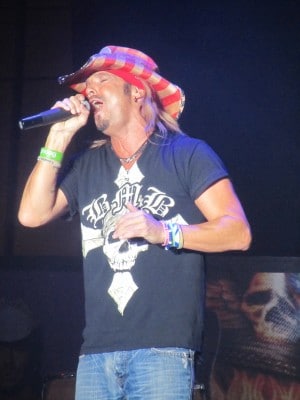 Poison‘s lead singer Bret Michaels reportedly announced that Poison would be reuniting and playing select dates together during the summer of 2016 and that this would include a stop at the Jiffy Lube Live in Bristow, Virginia, USA.

AXS reported the following while covering Michaels‘ concert at Rams Head On Stage in Annapolis, Maryland, USA on December 15, 2015: “It was to a packed house at Rams Head On Stage in Annapolis, MD, Tuesday night that Bret Michaels made the announcement Poison fans have been waiting to hear. There is going to be a Poison reunion tour. According to Bret, the band will reunite and play a few select dates during the summer of 2016 and local fans will get to see them play at Jiffy Lube Live. The excited crowd erupted into applause and was buzzing with anticipation for the event. Right now there is no ticket information available.”

Of note, Michaels does not have any solo concert dates announced on his Facebook page past May 7, 2016 making his announcement that he will be touring with Poison in the summer of 2016 that much more plausible.