Not very long ago, in a late night conversation with Bret Michaels Band guitarist and producer Pete Evick, the conversation turned to the upcoming single release. Pete produced and engineered the recording but mentioned to me how impressed he was with the fact that, aside from one female vocal harmony, Bret Michaels had recorded every instrument and vocal on the song. This piqued my interest so I started asking questions about the song that, virtually, no one has heard. Pete is familiar with my 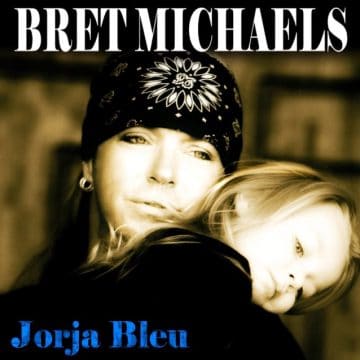 musical taste and was unsure whether it was a song I would enjoy. He told me about the conversation Bret had had with him, while on tour with Def Leppard, to convey the feel he wanted in the song. It would be raw, unencumbered, would be slightly more pop and would certainly appeal to his target audience, his daughter, 12 year old Jorja Bleu.

A while back, Bret wrote a song for his oldest daughter, Raine. This one is being viewed as the sequel to that song and I understood the idea of creating a song for his daughter that would appeal to her but when Pete let me hear the song, I honestly forgot about all of that. I got caught up in the lyrics about a father’s love for his daughter and his hope and encouragement. These lines were delivered on a beautiful melody. I was honestly surprised. I’ve always been a Poison fan (and even LOVED the Susie Hatton CD he wrote and produced for his then, girlfriend) so I didn’t expect to hate this song or anything…. but I didn’t expect to be pulled into it the way I was (and I don’t even HAVE a daughter)! I guess I shouldn’t have been so surprised as Bret is a BMI and ASCAP award winning songwriter. I challenge you to listen to this song twice through and then not find yourself singing “What if I fall?…. What if you fly?” throughout the day!

Emotion aside, the song even sounds great. It was originally supposed to be, simply, a demo of the song but Bret decided not to re-record it in an effort to retain his “true emotion felt in the moments of writing it”. The acoustic is perfect for this one and Bret‘s voice has never sounded better. Pete told me that this song was recorded on the bus in their mobile studio so I was impressed that the production is bright and clear. Bret‘s vocals are up front and present, not hidden under a ton of reverb and effects.

Today is Jorja‘s birthday and the official press release says this: “Following in her father’s philanthropic footsteps she has requested that a portion of the proceeds from the song will go to St. Jude’s Research Hospital. The video is equally as emotional, as it encompasses the father and daughter’s journey from her birth right up to today, with never-before-seen photos from Bret’s personal collection.”

I agree, the video is even a great representation of the song, with just Bret, his acoustic guitar and photos of himself with Jorja. It’s a very sweet tribute that I think every one of us can relate to, on some level, and enjoy.

The highly-anticipated new single “Jorja Bleu” is available today on Friday, May 5th on iTunes and all other digital retailers and subscription audio formats.