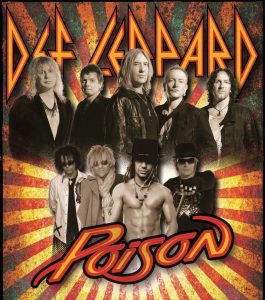 While Poison‘s drummer Rikki Rockett has advised that the Poison band members are working on getting the group “busy” for the spring of 2017, the group’s frontman Bret Michaels stated to The Salt Lake Tribune that Poison and Def Leppard will be touring together in 2017. At the same time, Michaels advised that he “hoped” for a Poison reunion suggesting that the Poison / Def Leppard tour plans are not set in stone.

The following is an excerpt from the article / interview with Michaels by the The Salt Lake Tribune on July 7th:

As for those who prefer Michaels simply stay in his rock ‘n’ roll lane, he has some potentially good news: Asked about a potential Poison reunion, he replied, “The honest answer to that is I absolutely hope so, and next year it’ll be Poison and Def Leppard. The last time we were out was, I think, 2012, and we’ll go out and bring it again, and it’ll be insane.”

You can read the entire article / interview at the The Salt Lake Tribune.

Of note, Michaels had announced a Poison reunion for 2016 back in December 2015 but that did not occur but likely due to Rockett‘s continued battle with cancer for a good portion of 2016.