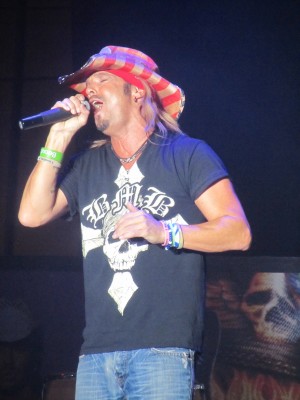 In what appears to be a shrewd move to patch any animosity between himself and his Poison bandmates, Bret Michaels reportedly told the Lancaster Eagle-Gazette on October 7, 2015 that, “We have never broken up, even though we all go on and do other things,” and “We are brothers. Next year will be the 39th anniversary and I’m sure we’ll do something special.”

Michaels may have been misquoted since Poison were reportedly formed in 1984 while the glam rockers’ debut album Look What The Cat Dragged In was released in 1986. It could be that Michaels meant the 30th anniversary of the release of Poison‘s debut album.

Michaels‘ comments are in sharp contrast to what drummer Rikki Rockett declared to Sleaze Roxx in an interview in August 2015. Excerpts of the interview follow:

Sleaze Roxx: It’s got to be frustrating for you, Bobby and C.C. to continue waiting for Bret. It seems like Bret is always playing around the country. I get that he’s ‘the voice’ of the band and the face of the band but Poison is a band.

Rikki Rockett: (Pause) It’s very frustrating and that is the main reason that I started Devil City Angels. I like to play and record music. That’s become a little bit of a problem recently (laughs)!

Sleaze Roxx: Are there any hard feelings there? Or is it as simple as one guy isn’t on the same page as the rest of the band?

Rikki Rockett: I just think… I don’t know for sure actually. I haven’t spoken with Bret in months and months. I just think that at this point in time, he just prefers to do his own thing. Bret has his own way of doing things and I’m getting the feeling that he’d prefer not to deal with the three of us if he can avoid it. Look, I’m making that up in my head. I can’t think of any other reason.

Sleaze Roxx: Do you think there’s some damage being done to the Poison name with Bret going out performing ‘watered down’ versions of Poison?

Rikki Rockett: The number one complaint that I’ve heard about Bret’s show is that he doesn’t play ‘Bret material’ and he plays ‘Poison material.’ I’ve heard that over and over from fans. I haven’t stepped out of Poison until Devil City Angels — because I believe that a band is more potent when you keep it together. I’m very loyal like that. I’ve been practicing Jiu Jitsu for 16 years now and I’m driving to Santa Monica which is 42 miles from me each way because I’m that loyal to my team. That’s the kind of person I am. Having said that, there isn’t a whole lot you can do when everyone don’t feel that way. I think we are kind of at that point — if we’re going to continue with Poison, we have to look at other ways that we can do this. Brandon isn’t a bad choice. It’s all I can say.