Poison frontman Bret Michaels continues to fight going from one medical issue to another. The singer will be undergoing surgeries in advance of the much anticipated The Stadium Tour (with Mötley Crüe, Def Leppard, Joan Jett & The Blackhearts, and Tuk Smith & The Restless) to repair his torn right shoulder rotator cuff and to remove some skin cancer that was detected after a recent biopsy.

The following message was posted on Michaels‘ website two days ago: 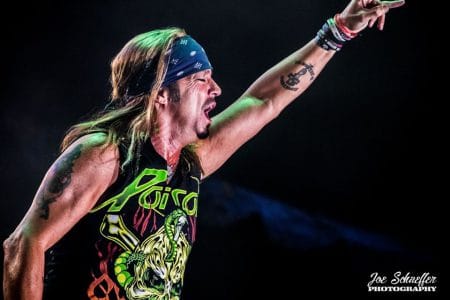 “After a very recent kickoff to the new year, physical & MRI it has been brought to my attention that I have torn my right shoulder rotator cuff which would answer the question why it looks like a lump or bone was sticking out of my right shoulder. A little more complex I will also have to undergo a procedure to remove skin cancer that was detected after a recent biopsy. I’m in the hands of incredible specialists who are both positive for great outcomes. It may slow me down a bit at the beginning of the year, but if God willing I promise this year will be awesome. Just a few less solo shows & special events until I get this all squared up. As always continuing great diabetic maintenance to keep on rocking in 2020! – Bret Michaels“

Wikipedia states the following in part about Michaels‘ medical issues in 2010 (with slight edits): “On May 20, 2010, it was reported on his official website that Michaels has been “readmitted to the hospital this week after suffering numbness on the left side of his body”. While conducting diagnostic tests it was found that Michaels has a “patent foramen ovale (PFO), a hole in the heart”. It was further reported that his condition is “operable and treatable” and his doctors believe they “have diagnosed the problem that caused the transient ischemic attack (TIA) or warning stroke”, but that they “feel it is highly unlikely this is connected to the brain hemorrhage he suffered just a few weeks earlier”. On October 11, 2011, Michaels commented on his 2010 health scare with the following: “2010 was, without question, a roller coaster year for me. But when you have an amazing family, and you still have a lot of music left to make, and you have such incredible and supportive fans behind you, you’re going to fight until the very last breath before you throw in that towel.”