The guitarist gave a detailed account of his time in ex-Guns N’ Roses drummer Steven Adler‘s band, which included helping to relapse a clean Steven Adler and eventually getting fired by the drummer’s girlfriend.

Forsythe indicated (as transcribed by Buzz Sprout with slight edits): 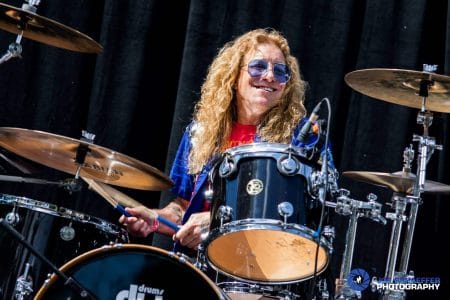 “So anyway, this Steven Adler thing. I forget how it came about, but I remember meeting him. We met at a Jerry’s Deli out there and Studio City to talk about doing some music. He wanted to put it together a band that did covers and do a residency at one of those clubs. I think it was Billboard Live maybe at the time. I forget. So anyway, I met up with him and we’re talking, I was starting to get into the drugs at that point and Steven was actually clean at the time. But because of his experience, he could tell that I was high [laughs].”

The guitarist continued: “Yeah, And I would know now that I’m experienced. I would know if I saw somebody, just the pinned eyes and all that stuff, you can tell. So he looked at me. So he brings that up and he goes, he asked me about it, and I said, “Yeah”, and he goes “You got any?” And I said, “Yeah.” Oh no. I said, “You know what?” because I knew he was clean at the time. He was poking around to see if I had any on me, and I’m like, “No, no, no, no, no. I don’t want to be responsible for that.” I said, “I can’t go there.”

And he ended up talking me into it. [Adler stated,] “I’ll take complete responsibility.” And anyway, long story short, we took a ride and we ended up doing some of my drugs. And then, he just went off the rails. I don’t know if you saw that Celebrity Rehab show. Well, once he starts, I mean he’s like overboard. And so that’s what happened. It took a couple weeks [for him] to get full blown.

We started rehearsing. The next thing I knew, he would be knocking at my window at my apartment, like early in the morning because I guess all his drug connections had been cut off at that point. So he came over because he knew I had some, so that he’d be at my place, and then, I tried to tell him, “No, I need this stuff.” And he would say, “Well, I’ll buy you more.” 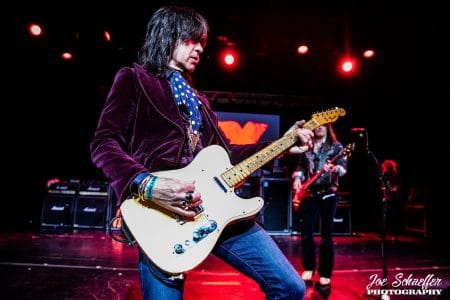 So it ended up this thing where he would just hand me money and I have to go downtown buy all these drugs, and then, you know, I’d get my share out of it, and he’d pay for it, but that’s how he kept it going. But it got worse and worse and worse, and he didn’t actually fire me. What happened was he got his girlfriend… It was obvious. He can’t hide it. I mean he got so bad that there was no way he could hide it. And, so she just like blew up on him when he ate home. I guess that they did an intervention. I think that’s what is was and he blamed the whole thing on me. He didn’t take any responsibility [laughs] like he said he would do.

So I remember — I think I’m still working at the time — because this is right near the end. At some point, I couldn’t work anymore. But I was still working and I get home from work, and it’s like two in the afternoon and this is before cell phones. So there’s a message on my answering machine and I hit play and it’s Steven‘s girlfriend and she’s screaming into the phone. She was calling me every name in the book, but she goes, “Don’t you ever come around our family ever again! We never want to see your face!” And she goes, “If you want your…” My amp and stuff was at Steven‘s rehearsal place.

“If you want your equipment, it’ll be in the alley outside the rehearsal.” She told me what time. At Noon or something, and it was like two in the afternoon, and I’m like “Oh Man!” So I  jumped in my car and I sped over there and sure enough, there’s my stuff and it had like a packing blanket over top of it. It was like a Marshal cabinet, my vintage basement head, and it’s just sitting out in the alley in North Hollywood. So I’m like “Aaaah!” So I loaded it up in my car and I drove it back and that was the end of that.”

You can listen to the entire interview with Brian Forsythe by Chuck Shute for the Chuck Shute Podcast at Buzz Sprout‘s website.