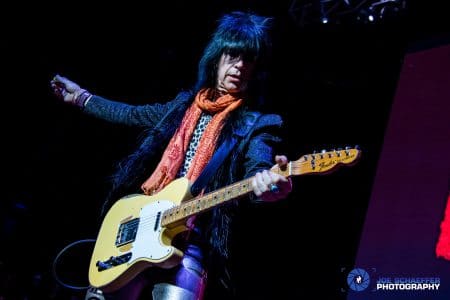 Forsythe reminisced about KIX‘s early days and some of the issues that the band had to deal with including stolen equipment, not getting paid and playing in some “sketchy” places. The guitarist recalled one gig in particular in North Carolina as he indicated:

“Luckily, we didn’t have out truck stolen because I have heard of that nightmare. I had a few guitars stolen along the way. And then yeah, not getting paid. That happened a few times. And there was a couple times where it was, like, really sketchy. This was the early days, before we had a proper booking agent and stuff like that, but, there was a place down… It was Fayetteville, North Carolina right on the border on the Emperor. I think. No, it was North Carolina in Fayetteville. Yeah, it was some club. It was the only time we ever played there. I can’t remember the name of the club. But anyway, we did this show.

And the way that we worked it, Donnie [Purnell] booked most of the shows around Baltimore [Maryland] and that area. Then, for some reason, Steve [Whiteman] handled all the North Carolina shows. So this is one of the shows Steve booked. And at the end of the night, we’re packing up and he goes back to get paid, and, the guy didn’t want to pay it or he wasn’t gonna pay us everything. I forget if it was just nothing or if it was just a partial payment or something happened. So Steve pulls out the contract and puts it down on the guy’s desk, and you know, pointing out that what we’re supposed to get.

And I wasn’t back there, but Steve told me later. He goes the guy, he opens up his desk drawer, pulls out like a 357 Magnum [laughs] and sets down on the desk, and he goes, “This is what I think about your contract. Now, get out of here before I call the cops!” And, so Steve comes back out there and he tells us about it, and sure enough, like a few minutes later, the cops show. Or maybe Steve threatened to call the cops. They showed up. And the cops were on the club owner’s side and they stood there and kept an eye on it and made sure we loaded everything out and sent us on our way.”

You can listen to the entire interview with Brian Forsythe by Chuck Shute for the Chuck Shute Podcast at Buzz Sprout‘s website.