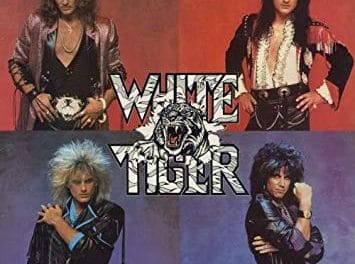 In terms of how White Tiger got formed, Fox indicated: “Well, some of the management approached me about them putting together a band. I heard the songs, and I really liked the demos. As I said, I knew Mark [St. John], we were playing the Orange County circuit, he was in a band called FrontPage. I would go see his band, and then he would come to see my band, and that was Pocketful at the time, so we always ran into each other. So, when they were putting White Tiger together, and they were 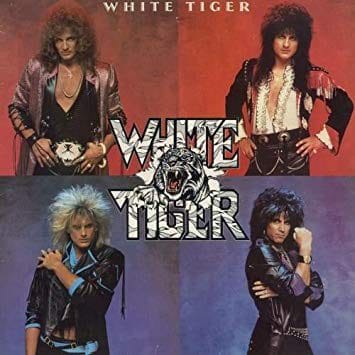 looking for a drummer, I guess I popped into their heads, and that was basically it. We just always kind of knew each other and were in the same circles.”

With respect to the recording of White Tiger‘s lone self-titled album, Fox stated: “God, Mark was loud. I got the demos, and he [Mark] basically told me to play what was on the demos. I was essentially reduced to a drum machine. I kept it really basic. We would rehearse, rehearse, rehearse, and, and then Mark’s like, “Okay, we’re ready to record.” And then, afterward, he was like, “Well, you’ve got to liven it up a little bit, put some risks in there.” … “Well, you told me to play it straight.” [Laughs]. I wish I could have worked on it a little bit. I wish I could have played more on it, and showed off a little bit more, but they told me to keep it simple.

Working in the studio, I just did my tracks, and at that time, I had a full-time job. I basically just did my tracks, and then everybody went and played on top of that. Every now and then I’d pop my head in the studio, and hear what it sounded like, and when you’re in a studio, it just sounds so great, but then, you get a cassette tape and you want it to sound like that, and it doesn’t, so you get disappointed. I just wish we had a little more guidance in that direction. We did an independent, self-release, and I kind of personally wish it would have sounded better. I think we could have used a producer, and I think that we should have spent a little bit more money on a producer. But you know, it’s what it is.”

On why White Tiger were never able to hook up to a major label, Fox stated: “I don’t really know. That was heartbreaking because I thought we had good songs, but I think one issue was we as a band were not constantly writing. I think we should have had about one-hundred songs to pick from, but we just wrote that first record, and then that was it. I was like, “Okay, let’s play some gigs.” … Okay, now let’s write the next record.” And that was when we did the demo for the next one, but that just kind of fizzled. I do like the songs. I thought the songs were really catchy. Maybe they could have been a little bit shorter. I thought that maybe they were a little bit too long, and again, that’s where a producer would have come in handy. I personally thought it was pretty heavy. I thought the songs were really good. We had been we had big dreams, you know? We thought, “Alright, we have a former KISS member and a Black Sabbath member. Here we go.” But it didn’t happen.”

In terms of what led to White Tiger disbanding, Fox opined: “It just honestly dissipated. Nobody was calling and nobody was picking up the phone. And there was this thing where I wanted to play, so I got involved with a cover band, and Mark wasn’t crazy about it, he just wanted the band to be like superstars. Mark had an attitude, and would be like, “You’re not allowed to go play bars.” I didn’t really agree with that, and then, nothing was happening, and I needed a little more income. Once again, I wanted to play, and we were poor, so it was a case of me just going in, I go, “Guys, I gotta go make some money. I’m gonna go play,” and I think that maybe Mark was a little upset with that, that I did do that. I think it just fizzled. I really can’t pinpoint why. Nobody ever said, “You’re fired,” or, “I quit,” or anything. Honestly, the band just…evaporated. I think was broken hearts, everybody expected something big to happen. We did demos and they were working on it, and I don’t really know their personal lives, we really didn’t hang out all that much, we just kind of rehearsed together. I don’t know if something was going on between somebody — I really don’t know. It just fizzled. And that’s happened to other bands in my past too. We just stopped calling each other.”

You can read the rest of the interview with Brian James Fox on Vinyl Writer Music‘s website.