Helix frontman Brian Vollmer continues to be active providing updates on Facebook and the singer has just provided an update on the band’s much anticipated “new” studio album Old School. Back in October 2018, Vollmer revealed that he had found an album’s worth of songs with many tracks that he had co-written back in the day with now deceased guitarist Paul Hackman. Vollmer planned on putting everything together with his current Helix bandmates and releasing it under the 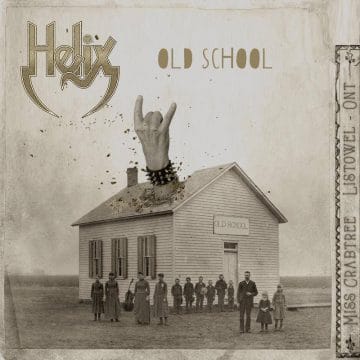 album name Old School in the spring of 2019. In mid-November 2018, it was reported that Helix‘s long-time drummer Greg “Fritz” Hinz suffered a fractured skull as a result of a fall from his home’s roof. The drummer is currently working on recovering from his injuries sustained in that fall.

The following message was posted on Vollmer‘s Facebook page less than an hour ago:

“Work continues on our new disc “OLD SCHOOL“. Brent Doerner has been busy on the cover artwork and it’s looking good. As well, Daryl had been nipping away at recording the tracks; working with Chris and Kaleb laying down guitar tracks. Three tracks (which were recorded for the Back for Another Taste album in 1989) are completely recorded and will soon be mixed by Seigfried Meier at Beach Studios up by Goderich.

On Sunday I talked to Tom Mathers of Perris Records, the label who is releasing the album world wide, with the exception of Canada. Tom has a whack of stations lined up that we’re going to be recording I.D’s for when it comes out. I’m very happy that Tom is handling this disc. He knows & loves the music and always does a good job marketing it. Some of the other companies put out albums like bologna-that is, they throw it against the wall and if it sticks they go for it. If not, then on to the next project!

Other points: Fritz is on the mend and thinks he may even be able to drum some gigs this summer. We’ll see…I’ve talked to him about “not rushing it” but ultimately he’ll know what’s best for himself. I just don’t want him to rush back and hurt himself. In the meantime he’ll be working with Daryl on the drums for the new disc. Daryl had the foresight in 1989 when we recorded “Back for Another Taste” to sample all the drums in Fritz‘s kit, so the drum sounds on OLD SCHOOL should all be consistent. I’ll also proud to say that my voice hasn’t changed that much either, which is quite the feat considering that’s 30 YEARS AGO!!!

Below is a prototype of the upcoming album cover. (not the final) Comments?”