Helix frontman Brian Vollmer continues to provide some fun and interesting stories from his musical past. 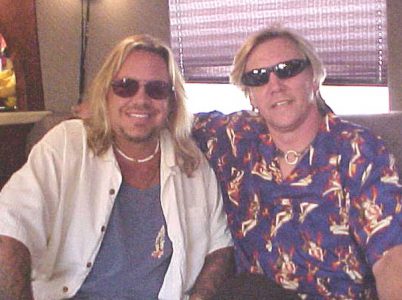 “Here’s some pics of a show I’d rather forget…lol.

We had a gig with Vince Neil in Montreal around 2000. In the band at that time were Mike Hall (formally of the Killer Dwarfs), Stan Mizchek (Sass Jordan), Darren Smith (Jake E. Lee) and Glen Gamble. Lynda and a good friend named Al Packham from the Hamilton group Animate came with us.

The day started off not too bad. We got to the gig and Vince invited Lynda and I on his bus. We had a little chat in the front lounge and Vince was in a good mood & friendly. He suggested that maybe we could get together after the show.

I had an interview with Musique Plus, the French version of Much Music. When I got back to the venue for sound check, things weren’t going so good. They never did get everything working for us.

The place was packed for the gig (around 2,500). The P.A. and our gear kept going out. At one point, Darren Smith (who was playing guitar for us along with Mike Hall) stopped the show and tried to fix things himself. It was a terrible set with all the shit going out, but nonetheless we ended on a good note with the crowd. I completed the show by pouring a bottle of water over my head in ROCK YOU. See ya! Gudnite!

When Vince showed up, they still hadn’t worked out the problems with the gear. Vince had two twin peelers on his arm. He deposited them at the the side of the stage to watch the show. 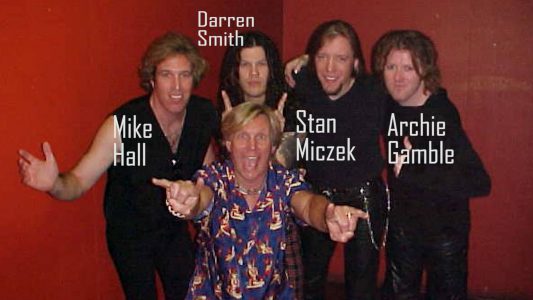 Vince‘s show picked up where ours left off-all sorts of shit going out on the P.A. Neil was obviously flummoxed and stopped the show. Pointing to the sound man in the balcony he yelled through his microphone, “See that guy over there??? THAT’S A F**KING GUITAR PLAYER! I WANT TO HEAR MORE F**KING GUITAR IN MY F**KING MONITOR YOU F**KING ASSHOLE!”

Well, Vince got more guitar in the next song. Lots of it. Also feedback to the extreme. Vince stormed off stage where he got into a heated argument with his road manager. Finally, he went back on. The water I had poured over my head in ROCK YOU had never been cleaned up and when Vince went to finish the song, he was singing he slipped and went right down on his ass. There was silence in the whole venue. Vince picked up his microphone and quipped, “EVER HAVE ONE OF THOSE DAYS???”

We never did party after the show with Vince. Don’t know where he went…probably with the twin strippers. My guys all went out and got hammered. My buddy Al got into it with Mike Hall (I wasn’t there when it happened) and wanted to scrap with him. (glad I wasn’t there) Overall the vibes were pretty shitty….”