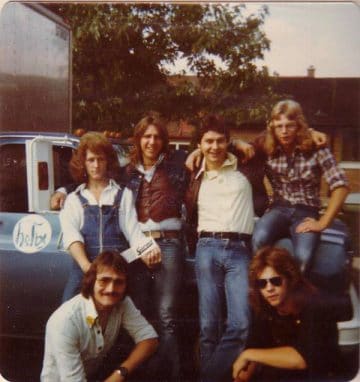 “Don’t know what band Ben Nagy was in (see post below) but it sure as f**k wasn’t HELIX. Back when the band started in 1974 EVERYONE in the band had to move gear. At that time bands would take huge P.A.s and lights to their gigs (which usually lasted for a week in the bars). Monday we’d arrive early to set up, and in Helix‘s case, a lot of times we’d even build the stage up so we could move around more. I remember playing in Flin Flon, Manitoba and I actually bought a 4’X8″ sheet of plywood from the local lumber store and carried it myself from said store to the club, right down main street!!!

We had a huge Martin system with gigantic mid bins, horns, and bass bins, not to mention Don Simmon‘s keyboard rack. His father had made a case for all 4 keyboards to go in, not taking into consideration that you needed a crane to move the damn thing. Try carrying something like that up and down stairs. Imagine moving a refrigerator… We had a lightman named Dale Wright, who used to comment that “There wasn’t a set of stairs I didn’t remember.” At the Coronet in Kitchener, which we played about twice a year, there were two floors you had to climb. 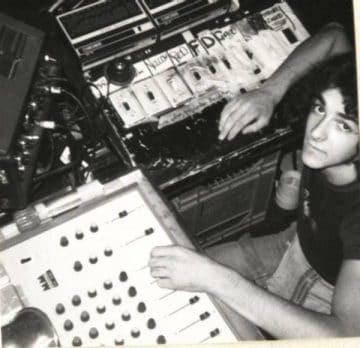 Once, when playing the thoroughly disgusting Hunt Club in Grimsby, Ontario (there was green algae on the shower walls of the place) Paul accidentally dropped one of the Martin bins on his hand. I was carrying it on the other side. When it happened, he looked at me, set the bin down and then immediately passed out. We all ran to help him, splashing his face with water. After a few moments he came to. He sat there for about 15 minutes and then said, “I’m alright now.” He stood up and passed out again.

And by the way, even when I was in my little weekend cover bands (7 Year Itch/Allyson Flyte/Jukebox) I still carried gear and I’d still do it if I was in one today. People told me to “sit down” and that it “didn’t look good on me” to be seen carrying gear into the club. After all, they reasoned, I was a “star”. But you know what? I have my own perception of what I am, not what other people perceive me to be, so I ain’t sitting on my ass. I’ve always liked the slogan Ronnie Hawkins used to quip to people: “I’m a legend in my own mind.”

Pic #4:
Ken Heague with our first sound and light boards. The light board was home made, frequently caught fire, so we kept a fire extinguisher close by!!!”