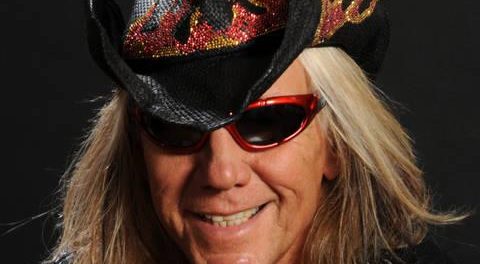 Helix‘s long-time frontman and band leader Brian Vollmer is promoting his new solo album Get Yer Hands Dirty and he reminisced on some of the band’s early struggles to get radio airplay while sharing a rejection letter from CBS Records to Helix dating back to early 1981. 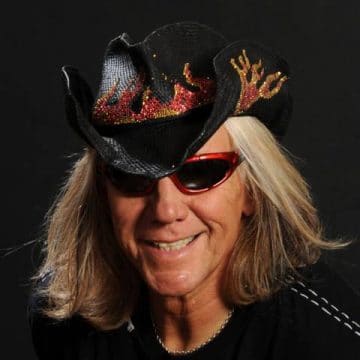 “Yesterday I talked to Jeff Liberty of CBC about the new VOLLMER CD; said he’d send me a list of DJs I could maybe give a ring to. Also phoned the Listowel Banner (interview this morning) and The London Free Press (interview on Friday). Just gotta keep diggin’-dig in the dirt! For artists like myself, that’s what it’s all about-getting down in the trenches and doing the work yourself. That would be the same thing we did back in 1979 when we released our first indie album “Breaking Loose”.

Back then no one in Canadian radio or at Canadian record companies would give us the time of day. Even when we had Walking the Razor’s Edge riding the charts and we were the hottest live act in Canada, we lost BEST LIVE ACT at the Junos that year to————wait for it—————————————————–The Parachute Club!!! File under “where are they now?” Like water off a duck’s back we forged forward, ignoring the ignoring. 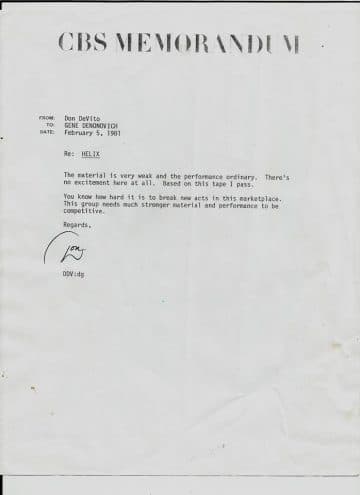 Today I’ve come full circle-still releasing independent music. I always tell the radio people AND the record companies the same thing, “I’ll be here when you are long gone.” Where are E.M.I., Capitol, Warner Brothers, Attic, and a slew of other labels today? Ditto for a lot of those jocks out there who used to be on the air. Being employed in radio is tentative at best these days.

Back in 1974 the record companies called our music “dinosaur music” and urged us to pack it in. One guy from CBS Records, Don DeVito, was enraged that we had the audacity to send him such inferior material. He signed his name Don with a huge “D”. The “D” had a big swirl at the top and it always reminded me of someone throwing back their hair as they talked. I still have that letter on my basement wall. Never met the guy, but he sounded like quite the pompous prick.

I always say to my students, “Pick a job in life that’s something you love doing and eventually you will make money at it. You’ll never be good working at something you hate or don’t have passion about.” I’m not getting rich doing the music business but life is much more than making money. You hear it all the time, but it’s true. Somehow, some way, I always seem to make it from year to year; I always seem to keep putting out music and making money, and the band keeps getting exciting gigs. Who gives a flying f**k if you’re not playing Rock the Park (or whatever it’s called this year-doesn’t seem to be much “rock” anymore) if you have a gig in Sweden? Not my guys in Helix, that’s for sure! LOL.”

Brian Vollmer‘s “Rock N Roll” / “Don’t Try To Lay No Boogie Woogie On The King Of Rock And Roll” video:

Rock n Roll/Don’t Try to Lay No Boogie Woogie on the King of Rock and Rollfrom the VOLLMER album GET YER HANDS DIRTYRecorded at Noble Studios in Toronto, spr…