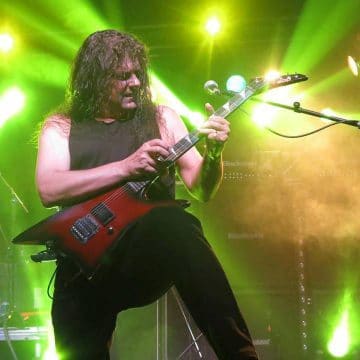 Fraser was asked whether grunge was the reason why Brighton Rock‘s last album Love Machine (released in 1991) didn’t sell as many copies as 1988’s Take A Deep Breath album.

The guitarist replied: “There was numerous factors. A lot of our supporters at the record company were gone and the new breed that came in did not care as much for us and would not promote the record. And we were in transition with getting new management which was quite difficult as no one was banging down doors for us like before. The grunge thing was just starting to take hold and our music was becoming out of fashion, so the writing was on the wall. Looking back I think we ended at just the right time, although at the time I refused to believe it.”

In terms of working with renowned producer Michael Wagener on Brighton Rock‘s debut full-length album Young Wild And Free, Fraser stated (with slight edits): “Michael was a lot of fun and brought a lot to the table. He was very encouraging and was a total team player. He really was one of the guys and I learned a lot from him. Going to be seeing him once again early 2019 on the ‘Monsters Of Rock Cruise’ that Brighton Rock are playing and it’s going to be great to reconnect after all these years.”

You can read the rest of the interview with Greg Fraser at Thunder Bay Arena Rock.

Official video for We Came To Rock by Brighton Rock