British Lion consisting of Iron Maiden bassist Steve Harris have released the new song “Spit Fire” from their upcoming sophomore album, which will be released sometime in 2019. 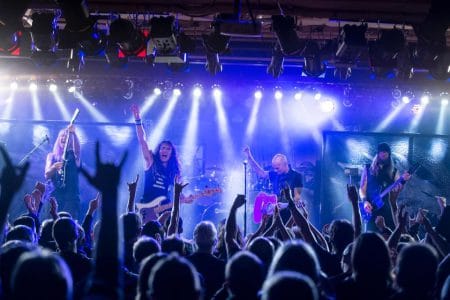 Harris was recently interviewed by Jim Barber of Music Life Magazine and spoke about his side project British Lion as he stated:

“It’s definitely more melodic rock and roll than metal. I do think that Maiden is pretty melodic too, but this is more of a mainstream kind of rock. It’s just a different side of things for me. It’s very different than Maiden, so if people come around expecting Maiden, that’s not what they’re going to get. Although to be honest, I don’t think people know now. The band has been around for a little while now and I think people know to expect something different.”

“We’re starting to find a new audience now. People may have come at first out of curiosity who aren’t Maiden fans, which is great. And they will either like it or they won’t. I think they will because it’s a good band with good songs and very good in a live setting, with lots of aggression and attitude and playing the songs with honesty and intensity.”

You can read the rest of the interview with Steve Harris at Music Life Magazine.

‘Spit Fire’ is the first single off the new album ‘The Burning’ – Out now!Order at www.britishlionuk.com/store***Catch us on our summer tour***Go to www.brit…