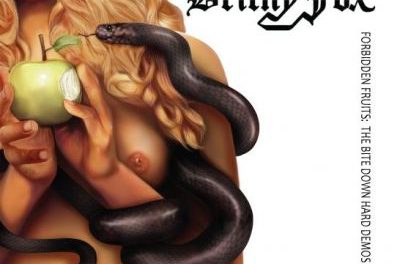 FnA Records has a real treat for Britny Fox as the band’s frontman has released two albums worth of demo recordings for the record Bite Down Hard.

After two albums, the original Britny Fox lead singer left to pursue other opportunities and the band brought in Las Vegas native Tommy Paris, aka Don Jillson formerly of the band Jillson. Bite Down Hard (1991) was the band’s third album and first album with Tommy Paris. This album resonated with the fans and they now can hear the other tracks written for Bite Down Hard album in their raw format.

Tommy Paris states, “These demos came from a group of countless songs written in the fall and winter of 1990. Most were discarded as fleeting bits of inspiration; unrefined and purposefully incomplete. After months of writing, recording demos and listening to a mountain of material, including songs written for us by L.A. and New York songwriters, we settled on the final 10 songs to be included on “Bite Down Hard.” Those chosen tunes began as raw demos created from scratch on an inexpensive Tascam 4-track and went on to be recorded in the full-blown facilities at Devonshire and One on One Studios in North Hollywood where Metallica recorded the “Black Album.”

Each album (Volume 1 and Volume 2) have 10 demo tracks that were written for the Bite Down Hard album and two personal Tommy Paris solo tracks. The albums also have a couple of cover songs. Volume 1 shows the track “Riff Raff” originally by AC/DC and a smoking version of Slade‘s “Little Sheila.” Volume 2 has a cover of the song “Sweet Hitchhiker” originally by Creedence Clearwater Revival. It also contains a personal song that Tommy wrote for his wife Tracy.

Tommy also states, “What I enjoy about songwriting is it’s unrestrained creativity which is then groomed, gleaned, and refined to the final imposition of an officially stamped conclusion. The inspiration comes from all of these stages existing chronologically as a bound and determined crusade. It’s a deep cultivation and although laborious at times, there’s nothing like it. I’m currently writing songs for a brand new album and the quest for ever greater songs continues…”

The discs are silver pressed and remastered direct from the original demos. Both albums are available at FnA Records. A fan pack autographed by Tommy Paris is also available.”

You can purchase the two albums directly from FnA Records‘ website.

Tommy Paris‘ “Roll Over You” video: