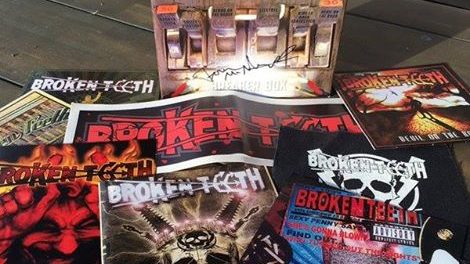 The Jason McMaster led Broken Teeth have released a box set consisting of six of their albums including some that are hard to find. The box set is selling for only $50.00 US + shipping and handling. It can be purchased from the Broken Teeth website. 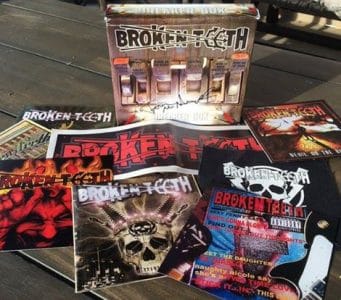 Broken Teeth describe the Breaker Box set as follows on their website:

New- Broken Teeth “Breaker Box“…
Featuring the first six releases from Broken Teeth
Hand made to order by members of the band for a collection of rock n roll that is hard to contain in one place- Broken Teeth–Breaker Box, will remind you of all your fave songs from the Teeth repertoire!

$50 (does not include shipping and handling)”

Sleaze Roxx stated the following in its review of Viva La Rock Fantastico back in 2010: “As always, McMaster‘s voice is at its screeching best. Love-it or hate-it, this is the voice of deliciously sleazy hard rock. It is a voice that slices through your skin with the precision of a razor-sharp blade before reaching inside, grabbing hold of your spinal cord, and shaking the shit right out of it. That’s what it, and Broken Teeth, do to me anyway — the music hits so hard that it sends a shiver right down my spine. This doesn’t happen often, but when it does you know you’ve stumbled upon musical perfection.

Hit random on the CD player, close your eyes, and a gem is going to start up. From beginning to end Viva La Rock, Fantastico! hits hard, mixing the snotty-nosed attitude of Dangerous Toys‘ underrated Pissed with a furious rendition of AC/DC‘s three chord boogie. It makes for a great combination on every song, but especially “Blackheart”, “Exploder”, “Bullet”, “Ride Upon Glory” and the title-track. The CD creates an image of ‘Pastor’ McMaster standing behind his podium, with lightning and crimson skies in the background, while his loyal subjects bang their heads in agreement and endlessly scream for more.” 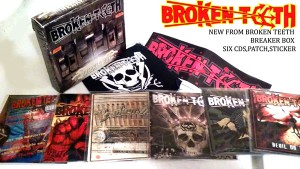 In regard to Broken Teeth‘s Electric which was released in 2008, Sleaze Roxx stated in its review: “The differences on the re-recorded tracks are very subtle, at times hardly noticeable (unless you’ve spun those early discs as much as I have). I wonder if Broken Teeth decided to give their classics another go to introduce the new guitar player? Or maybe the band just feels that during the years since their initial release they have fine-tuned them? I’m not sure what the answer is, but it turns Electric into a sort of greatest hits compilation disc.” Sleaze Roxx concluded its review by stating: “If you’ve loved Broken Teeth‘s earlier work then Electric will be a must have for you, as “Roll Over”, “Electric”, “Blood On The Radio” and “Hell For Sale” are pure adrenaline and attitude driven rock songs. Jason McMaster and company have delivered another killer disc, even if I don’t fully understand the reasoning behind it.”

With respect to Broken Teeth‘s live album Blood On The Radio released in 2004, Sleaze Roxx stated in its review: “When it comes to live albums I can take ’em or leave ’em, and with only two studio releases under their belts I’m really not sure if a live CD from Broken Teeth is necessary. But Blood On The Radio has been delivered, so regardless of whether it was needed or not how does it sound? It sounds great, as Broken Teeth prove that they can deliver onstage as well as they do on album. The hometown Austin, Texas crowd is surprisingly mellow though – I would have pictured the crowd to be severely drunk and screaming for more.”