Broken Teeth consisting of frontman Jason McMaster (Dangerous Toys, Ignitor), guitarists Jared Tuten and David Beeson, bassist Robb Lampman and drummer Bruce Rivers have released a video for the track “House of Damnation” from their upcoming CD/DVD, which will presumably be titled Evil In The Queue. 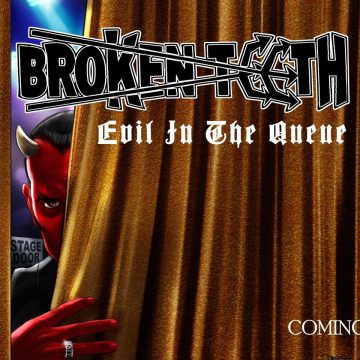 Sleaze Roxx stated the following in its review of Bulldozer:

“Broken Teeth will likely unfortunately never get their just due from a commercial success standpoint but for those who follow the group, it is one of the most consistent rock and roll bands out there in terms of coming up with straight forward rockers where compromise is non-existent. Bulldozer is a prime example of what Broken Teeth do best. All of the original songs from Broken Teeth on Bulldozer are pretty much no frills straight to the point hard rockers. As McMaster recently stated to me during an interview, “The feel of simple, almost one note song writing, became a passion.” Bulldozer consists of five original songs from Broken Teeth, two of which have already been released in the last couple of years as singles (“Devil On The Road” and “Flamethrower”), and two cover songs. The three new unreleased Broken Teeth tracks are fast paced rockers and all seem pretty similar in terms of pace and length. My favorite out of the five original Broken Teeth songs is “Devil On The Road” which has a bluesier very old school Twisted Sister feel to it and which is not quite as fast paced as the other Broken Teeth original offerings.”