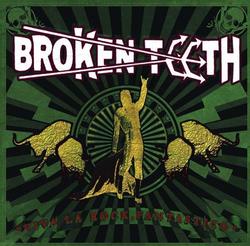 Broken Teeth have unveiled the artwork from their new CD ‘Viva La Rock, Fantastico’, now available for order at www.perrisrecords.com. Tracks from the new album can be heard at www.myspace.com/brokenteeth and the CD will be premiered this Tuesday on Metalexpressradio.com at at 6:00 and 18:00 Central European Time.

Viva la Rock, Fantastico!” is another evil sermon of devilish delights and rock-altar anthems from Dangerous Toys’ Jason McMaster. From the torch-fire, rat-a-tat blast of “Blackheart” and the frantic missile-scream of “Dressin’ Up in Flames” to the nervous shakedown of “Break the Spell,” and the aptly titled “Exploder,” “Viva la Rock, Fantastico!” finds Broken Teeth’s six-string pitchfork attack taking equal jabs at feverish fun (“Twister” and “Bullet”) and pleasurable pain (“Spitting Nails” and “Get Outta Here Alive”).

“This is the first Broken Teeth album written by the band’s current lineup,” McMaster said. “In a sense, it marks a new beginning while still maintaining our signature sound. We definitely get the fists in the air, but we also like to give the girls a little something to grind to. If it ain’t down-and-dirty, it ain’t rock-n-roll.”

Helping Broken Teeth fan the “Fantastico!” flames is blood-sweating Canadian rocker, Danko Jones. The rock-n-roll outlaw from the Great White North lends backup vocals to the album’s tequila-spiked title track as well as the shout-along stormer, “Big Spender.” “I met a Broken Teeth fan from Scotland online and she sent me some CDs of upcoming new music,” McMaster explained. “One of the CDs was Danko Jones. I shit myself! I knew there was real rock-n-roll out there somewhere and I had finally found it. A few years later, Danko was coming through Austin with Turbonegro. I went to the show, introduced myself, gave Danko some CDs and stayed in touch. A few years later, he’s singing on my music.”

Broken Teeth formed in Austin, Texas, in 1999 when McMaster (Watchtower and Dangerous Toys) recruited former members of Dangerous Toys, Dirty Looks and Pariah for a side project that allowed band members to have some fun indulging their dirty rock influences including AC/DC, Rose Tattoo, Circus of Power and The Four Horsemen. More than a decade later, Broken Teeth has firmly established its own tattered and frayed identity with a discography that includes the self-titled debut, “Guilty Pleasure,” “Blood on the Radio” and “Electric.” As new track “Back on the Road,” makes clear, “Viva la Rock, Fantastico!” will keep Broken Teeth spitting the gospel of rock-n-roll !