For most of their music career, Iron Maiden have been one of the few ’80s era heavy metal bands continuing to release new music and playing lots of their new material on each tour. The group has also achieved a lot of success in the USA including grossing about $1 million per night during its latest tour despite apparently never achieving a multi-platinum selling album in the US. 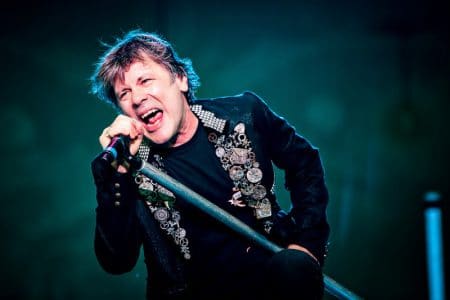 Iron Maiden‘s frontman Bruce Dickinson was recently interviewed by Fortune. Dickinson was asked why a third of the material being play live by Iron Maiden during their last tour were songs from their latest studio album The Book Of Souls while many of the band’s ’80s era peers keep playing mostly a greatest hits set. Dickinson replied: “If you take advantage of them (fans) as in you serve up the same old thing every single tour, you can expect some of them to walk away. That is just a band becoming a karaoke band. If you’re not doing new music why bother? We don’t share the idea that going and doing stadiums, playing 30-year-old songs, is a success. It’s just making money.”

In terms of fans who only want Iron Maiden to play their ’80s classics, Dickinson had some strong words as he stated: “That’s tough. In that case, don’t come.”

With respect to why his second stint in the band has already reached 18 years (and counting) and is longer than the first time that he was in the band (1982-1993), Dickinson advised: “Everybody realized that the most important thing about being in Iron Maiden was that Iron Maiden was the most important thing. There are no more power struggles now.”

You can read the rest of the interview with Dickinson at Fortune.