Former KISS guitarist Bruce Kulick was recently interviewed by Ultimate Classic Rock on the occasion of the 25th year anniversary of drummer Eric Singer‘s first show with the iconic and legendary band. 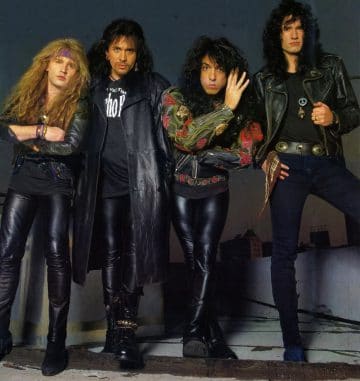 The following are excerpts from the article/interview from Ultimate Classic Rock:

“It was very evident to me that Eric Singer was not only a great drummer that would complement the style of Kiss, but he could take direction if needed,” Kulick says. “I spent a lot of time talking to him about the dynamics of the band. Since he’d worked with Paul in the past, that experience helped make him comfortable for an audition. He was very sensitive about the passing of Eric Carr. He showed respect as if he knew the band is a family, and our family lost a member. Not an easy role to walk into.”

And Kulick confirms Singer’s recollection of the band’s logo wrong appearing incorrectly on his drum kit, which Stanley pointed out the moment he’d seen it. “Eric learned how many details are important in Kiss,” he says. “It was fun to see Eric get it right, and he continues to have a clear vision of exciting drum kits onstage for every tour they do.”

He also notes Singer’s welcomed sense of humor. “We always have fun hanging together, goofing around and picking on each other,” he recalls. “Gene probably gets the most ribbing, since he’s larger than life. Eric’s energy is quite supercharged, so there were rarely quiet moments. In many ways, his personality, for the dynamics of the band was familiar. Eric Carr joked as well. I was quiet most of the time. And you all know how Gene and Paul love to interact! So it was easy to have Eric Singer enter the Kiss family.

“I knew way before the first show he was going to do an amazing job, but the energy and performance that night just confirmed what was already known,” he continues. “Eric listens, loves guitars, knows how to be a team player both musically and personally, and loves all eras of Kiss music.”…

The only possible sticking point was the color of the new drummer’s hair, Kulick says. “Kiss has big black hair, always,” he points out. “But he’s blond! A carefully discussed decision allowed his golden hair to be a part of the Kiss Revenge era. It was a smart decision, and it made us feel more natural together. Eric Singer was meant to be the new drummer of Kiss, and his long ongoing tenure proves that very clearly.”

You can read the rest of the article/interview with Kulick at Ultimate Classic Rock.