Today is the 25th year anniversary of KISS‘ historic MTV Unplugged show that saw KISS mainstays Paul Stanley and Gene Simmons reunite with original band members Ace Frehley (lead guitar) and Peter Criss (drums) for a live performance, which was the first time they performed live together in 16 years. KISS‘ MTV Unplugged show started with the current band line-up at the time of Stanley, Simmons, guitarist Bruce Kulick and drummer Eric Singer before Frehley and Criss rejoined Stanley and Simmons for two songs (“2000 Man” and “Beth”) and the evening ended with all six musicians performing the 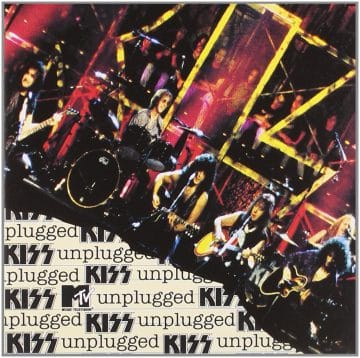 songs “Nothin’ To Lose” and “Rock And Roll All Nite.” Kulick released a video on his YouTube channel today where he shared his recollection of that historic night.

“Hey everyone! KISS anniversaries really do mean a lot to me and one that really stands out in my career for those 12 years is one that happened on August 9th, 1995. It was filmed and recorded at MTV‘s Sony Music Studios in New York City. It’s KISS‘ MTV Unplugged.

The official conventions, KISS conventions, in 1995 were very successful for the band. And that’s when we were playing acoustic doing songs from all off the years in the band. It was really a lot of fun. This caught the attention of MTV but the network wanted fomenting better, and they wanted to bring out Ace and Peter to also be at this amazing event.

Rehearsals started at SIR [Studios] just a few days before the event. Now, we already knew a lot of the songs that we wanted to play. There was quite a few to go over but when Ace and Peter arrived, that was really something special. Everybody was really cordial and we all got along fantastic. Now, Ace and I had a talk about the challenges of playing lead guitar on strictly acoustic instruments. I was explaining to him one of my secret tricks — a pedal that I had from Tech 21 that would boost the signal a little bit. That was really cool of us to have that little guitar chat. That was done also at Sony Rehearsals at the studios on the day before the event on August 8th. So we had the rehearsals at SIR and one also at Sony Studios as well.

And now we’re ready for the big day and I can promise you, I didn’t sleep the night before. But I will never forget what it felt like to walk out onto that stage.

From the setlist variety to the acoustic sounds, and then the reunion under those quality lights of that studio, this was an incredible part of KISStory and an even that I’ll never forget. The production was really incredible from the purple lights to the camera angles to the sound. The band looked and sounded like a million bucks. The setlist had so many highlights but there were songs that I have never really played with the band professionally before. “Sure Know Something”, “A World Without Heroes” — truly amazing performances. I was so proud of the band that night. We played with so much passion and playing those songs acoustically was so intimate for the crowd, I really felt that we were all one that night.

So now it was time for the reunion and there was Ace and Peter coming out. I had to step aside. The reaction from the crowd was unbelievable [emphasis added] and as weird as that was for me, it felt like I was a big part of KISSstory that night. After their performances, Eric and I rejoined the band onstage where all six of us played “Nothin’ To Lose” and “Rock And Roll All Nite.” We blew the roof off the place. What an incredible, momentous event for KISS and the KISS fans.

I hope that you enjoyed my recap of the anniversary of KISS‘ MTV Unplugged event. It certainly was a lot of fun! Please reach out to me through my website brucekulick.com, subscribe to my YouTube channel and make sure to click on the bell for your notifications, and then of course look for me on social media. Stay safe. I’ll see you all soon. Take care.”

Bruce Kulick‘s recollection of KISS‘ MTV Unplugged on the 25th Anniversary of the Show:

KISS performing “Sure Know Something” on KISS‘ MTV Unplugged:

KISS performing “Nothin’ To Lose” and “Rock And Roll All Nite” with Ace Frehley and Peter Criss on KISS‘ MTV Unplugged: