“My brother Bob’s recent death was a shock to me as well as the entire music world. Words cannot express the emotions I felt with the sudden news. Even though we had some issues in the recent past, we both respected and loved each other very much. Some of his contacts just recently shared with me how he spoke well of me, and if anything ever happened to him, that his brother would handle his affairs.

Lisa and I have been dealing with all the unfortunate matters that one has to take care of when a loved one passes away. Anyone that has experienced this would understand the sadness and the complexities involved.

Bob lived alone in Las Vegas. Although he died at 70, he lived a full life, with his music career beginning as a teenager. I was always proud of his ambition to make it in the music business. Looking back now at his accomplishments and the list of artists he worked with, he did fulfill his dream. He collected everything from every tour, recording session, travel photos, post cards, press clippings, and anything related to his 50-year career.

Lisa and I are overwhelmed with the vastness of what we have found. And happy of course to know he saved these items. Over time I will share things with you, since there’s so many interesting photos and clippings of his career I know you will love.

In addition to all of his personal items, some of you might remember that Bob lived in Beverly Hills for 30 years. He was in a long term relationship with the famous Hollywood actress named Stella Stevens. He met her in 1983, and I jokingly called him “Hollywood Bob”. Her legacy is something that Lisa and I will share with you as well, and I am certain this is something that would make Bob smile from heaven. Stella meant the world to him, and he loved and adored her very much.” 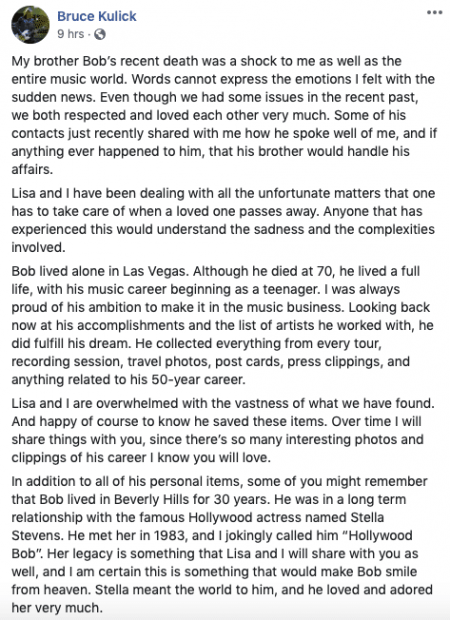