New Zealand rockers Head Like A Hole are the subject of a documentary entitled Swagger Like Thieves that has been described by Tamzin Beazley of Off The Tracks as “An artful tale of hard times. A bit brutal, but very truthful.” Swagger Like Thieves will have its world premiere at the Civic in Auckland, New Zealand on August 3, 2017.

The New Zealand International Film Festival states about Swagger In Thieves in part:

“Head Like a Hole stormed across the national consciousness in a blizzard of outrage, stunts and gigs in the early 90s. Any band as thunderously loud and theatrically confrontational as HLAH, with such a history of implosion, tragedy and resurrection, is going to have a story worth telling. 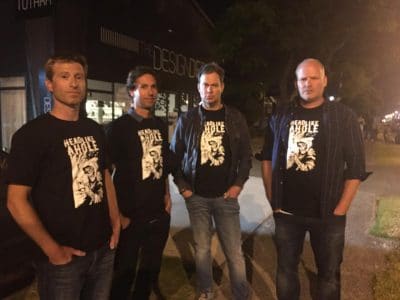 Swagger of Thieves director Julian Boshier has worked for a decade on this film. Sometime during that marathon of bloody-minded perseverance, he has earned the trust and respect of Nigel ‘Booga’ Beazley and Nigel Regan, the ever-collapsing binary stars who are the guts of any HLAH line up. Boshier finds the two men staring down the age with belligerence, vulnerability, shamelessness and honesty. There is no legacy polishing here, and no one’s feelings are spared.

Alongside the brace of Nigels we meet Tamzin Beazley, in many ways the camera-shy hero of the story, holding together a family in the face of Booga’s occasional flailing darkness. Ex and present band members emerge in various iterations – some wounded and disgruntled, others with their gruntle still fully intact. Studded through the film are performances by the band in all their cock-wobbling, floor pounding, propulsive and preposterous glory.

Swagger of Thieves is a heartfelt, hilarious and heartbreaking trip into the reality of the hardest-charging band of a generation. Whether you come as a fan of the music, as a fan of solid filmmaking, or as a bystander wondering what all the noise is about, you’ll be seeing one of the most intelligently assembled and truthfully told documentaries New Zealand has ever produced. — Graeme Tuckett“