Brute Forcz, the heavy metal band led by wrestlers Jammer and Slammer, have announced that they have a new guitarist by the name of Russell Tiberius Russell. 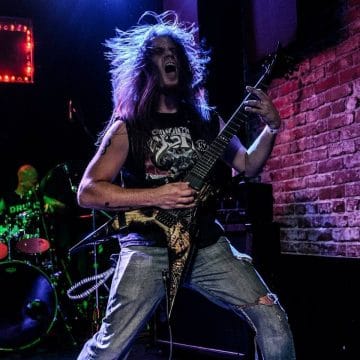 “Brute Forcz would like to welcome their new guitarist, Russell Tiberius Russell. RTR has been a staple of the LA music scene for many years. We are very fortunate to have him playing with Brute Forcz. He is also just happens to be one HELL of a guitar player. The band expects big things in the future with RTR on board………”

Sleaze Roxx concluded as follows in its review of Brute Forcz‘s self-titled EP: “Clearly, Jammer‘s talking/singing vocal delivery takes some getting used to. After many listens, I find Jammer‘s talking through the songs tolerable for the three faster paced songs on the EP and quite simply very annoying on the slower track “Death Is The Devil.” I’d actually like to see what this band could be capable of if they had someone handling the lead vocals. I note that Jammer also plays bass on Brute Forcz so even if he relinquishes his lead vocal duties, he would presumably not lose his spot in the band. Who knows? Perhaps that is what is needed for Jammer and Slammer to take that next step to make Brute Forcz a real viable second career.”