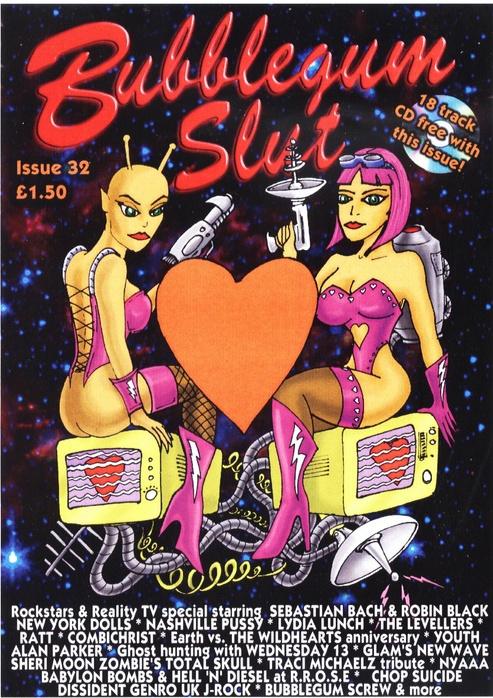 Bubblegun Slut’s 32nd Issue came out at the start of the month and has a rather tasty array of rockstars inside. As well as interviews with the likes of the New York Dolls, Sebastian Bach, Nashville Pussy, Ratt, Robin Black and many more, readers can bag a 18 track sampler into the bargain cover price of £1.50.

The magazine is now looking for 16 more suitably sleazy acts to contribute tracks to their first sampler CD of 2009. They want the world’s dirty rock bands to know and submit their stuff, so interested parties can contact them to request full details by e-mailing bubblegumslutzine@gmail.com

NEW YORK DOLLS – Sami Yaffa and Steve Conte on no longer being the Dolls new boys, some Hanoi Rocks home truths – plus some amazing and exclusive Dolls artwork by Swordfish Designs.

ROCKSTARS & REALITY TV SPECIAL – A 8 page special feature on the lure of the reality limelight for rockers, including interviews with SEBASTIAN BACH and ROBIN BLACK

LYDIA LUNCH – Usually the NY icon charges for interviews on involvement with No Wave, here she tells us why she freely opted to revisit it by endorsing Cherry Red records’ new Teenage Jesus compilation

THE LEVELLERS – As 8th album ‘Letters From The Underground’ marks 20 years for the band frontman Mark Chadwick gives his guide to underground survival.

THE WILDHEARTS – As they play a string of anniversary shows the band, and one very loyal fan, share their memories of ‘Earth Vs…’s release 15 years ago

ALAN PARKER – The punk biographer turns his pen to Vince Neil, but admits that after 3 books he’s not over Sid yet, spilling the beans on new documentary ‘Who Killed Nancy?’

GLAM’S NEW WAVE – It’s glam, but not as we know it. Dear Superstar, The Galvatrons, Blessed By A Broken Heart and The Morning After lead the way in taking spandex and solos to the post-hardcore posse.

Plus columns, gig & and CD reviews totalling more than 80 pages!

Copies can be ordered via PayPal from our MySpace for £2.40 including UK postage, or £3.00 R.O.W. Find PayPal buttons in the ‘About Me’ section at; www.myspace.com/bubblegumslutzine

Alternatively cheques and postal orders can be made payable to ‘A. Bateman’ at 27 Stores Lane, Tiptree, Essex, CO5 0LH (UK orders only)