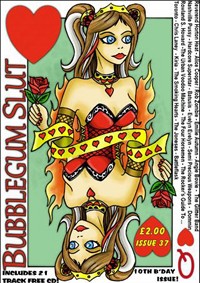 In addition to presenting five live bands and laying on birthday cake, plus packed party bags for early-birds, Bubblegum Slut has just announced that Swedish sleaze stars Reckless Love will be joining the celebrations on September 25th, having chosen to make this the official aftershow for their Relentless Garage gig on the same night. Full details for your listings are included below.

Since it was established in September 2000, by then teenage editor Alison B, Bubblegum Slut has provided a quarterly posting from the glam, sleaze, goth, punk and psychobilly undergrounds. Though still distinguished, as it was on day one, by the trademark fake-fur heart and bawdy lowbrow art which adorn the cover of each issue, the zine has come a long way from its beginnings as after-school project offering the editor underage entry to gigs across the country.

Cutting the cut ‘n’ paste, increasing the page count and circulation, and adding full colour covers and regular covermount compilations has culminated in the packed 100-page anniversary edition that goes out this summer. Along the way major publishing group Emap have seen fit to twice nominate Bubblegum Slut at their annual Fanzine Awards, Rock Sound magazine have praised it in a review as being “diverse, informed and extremely well-written… a shining example to fanzines everywhere”, and a host of living legends and rising stars have given it their time, with notable interviewees including New York Dolls, Justin Hawkins, Adrian Edmondson, Lydia Lunch and unlikely cinema stars Anvil.

However it’s not so much these developments, as the characteristics Bubblegum Slut has stubbornly retained year-on-year which have led it to become an increasingly unique voice from the underground. While printing costs and progress have inclined many with the urge to self-publish to take their operations online over the past decade, Bubblegum Slut has almost fiercely retained its physical format; supplying its samplers as CD hard copies and, with reference to the softer touch of those tactile front covers, declaring itself not a glossy but a fluffy. These touches have endeared the zine to a dedicated set of international subscribers and a regular readership of gig-goers, who hunt their copies down at shows — where the vast majority of each print run is still sold.

Since leaving school Alison B has sold a lot of t-shirts on a lot of merch stalls, handed out a hell of a lot of flyers for a lot of promoters, worked in a sex shop (a surreal six months once recounted in a Bubblegum Slut article) and also worked on national glossies such as Zero and Alternative magazines. It is experience writing for larger commercial publications which has made her ever more resolute in ensuring Bubblegum Slut’s content remains ungoverned by advertising, trends or target audiences. Such an approach results in eclectic issues – which leap from paying tribute to gone and unfairly forgotten acts, to singing the praises of up ‘n’ coming ones and showcasing music-inspired film and fashion, the only clear common thread between articles being an honest and obvious passion for the subject in hand. And here’s to another ten years of that!

Available from the PayPal Storefront at www.myspace.com/bubblegumslutzine