Buckcherry And Hinder Among First Bands Announced For ShipRocked 2011 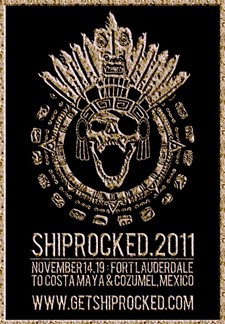 “ShipRocked 2011 will be five days of wall-to-wall music, giving fans the rare opportunity to listen to and hang out with rock stars on a luxury cruise ship. With a vast array of rock bands, there’s enough music for whatever your mood desires from modern metal to old school hard rock sounds and many surprises in between”

The retro styling of LA’s multi-platinum Buckcherry and their string of hard-rocking anthems and power ballads lead the way for this year’s ShipRocked 2011. The Music and Life-style cruise sets sail November 14-19, 2011 heading for the tip of Mexico and its popular stretch of gorgeous Caribbean water known for scuba diving, shopping and bars aplenty. Buckcherry headlines along with fellow rockers Oklahoma’s Hinder (“Lips Of An Angel”,” Use Me”), metal titans Hellyeah! featuring members of Mudvayne and the legendary Pantera who bring their stampeding metal groove on-board and SR 2010 alum, Atlanta’s Sevendust, brought back by the demand of prior cruisers – bringing an intensity only matched by 20-foot sea swells, helping solidify a four-pronged trident of rock and roll mayhem.

ASK4 Entertainment’s Alan Koenig promises “ShipRocked 2011 will be five days of wall-to-wall music, giving fans the rare opportunity to listen to and hang out with rock stars on a luxury cruise ship. With the confirmed artists onboard (and additional acts to be announced), there’s enough music for whatever your heart rate can withstand” Main support comes from LA’s In This Moment led by the vocal pyrotechnics of Maria Brink. And we’re happy to have returning late-night favorites Lynam, as well as the inescapable Texas thunder of Broken Teeth led by the affable Jason McMaster, and new sensation Rival Sons and their brand of 70’s style guitar groove.

Prices start at only $799 per person, based on double occupancy, and include exclusive access to all ShipRocked concerts and special events, deluxe stateroom, meals, ship activities, ship entertainment and much, much more! Space is limited so early booking is encouraged to guarantee your cabin. General on-sale begins on Monday, February 28, 2011.

Tickets for ShipRocked 2011 are being sold on a first-come, first-served basis, and are only available at www.getshiprocked.com or by calling 1-888-438-9509.