Buckcherry Looking To Release New Album In Spring Of 2012 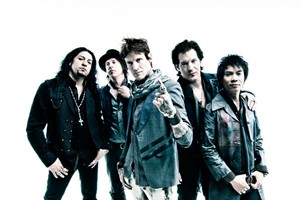 Original Buckcherry members Josh Todd and Keith nelson recently sat down with EspyRock. During the interview the duo revealed how they are currently working on their brand new album. While it will stay true to the Buckcherry sound, the band, who now have five demos together for the album, are looking to push the envelope and try something a little different.

EspyRock: How are things coming along?

Josh Todd: Things are coming along good, we’re having fun and we’ve got around five demo’s mopped up but it’s still very early and we need to get everyone in a room and just jam.

Keith Nelson: Without saying too much, I just think the pervasive feeling of the stuff we’re coming up with, we’re just trying to come out of our comfort zone a little bit. Really trying to push the envelope without getting away from the sound that you and love of this band but I think we’re going to try to push the envelope and go for something cool and different.

EspyRock: Will you take a bit of time off then to relax and work on it?

Keith Nelson: We’re getting a head start right now because we’ve had a couple of one and two week breaks during this tour over the Spring so we’re taking some time to get some music together so we’ll be a little ahead of the curve when we actually finish up and once we wrap up the touring on this record we’ll be at it every day, five days a week like we always have.

EspyRock: While you don’t have any deadlines have you got an idea of when you would hope to be releasing it?

Keith Nelson: I think it would be realistic to say next spring.

EspyRock: Just take it as it comes basically

Keith Nelson: Exactly man. We’re home with our families, working on new stuff and it’s good for us as we get to be home. We travel so much so we spend the holidays with our families and the studio is in my backyard so everyone knows where to go and it works out quite well.