Buckcherry consisting of frontman Josh Todd, guitarist Stevie D., bassist Kevin LeMieux and drummer Francis Ruiz have a new bandmate who is none other than Jetboy guitarist and co-founder Billy Rowe. 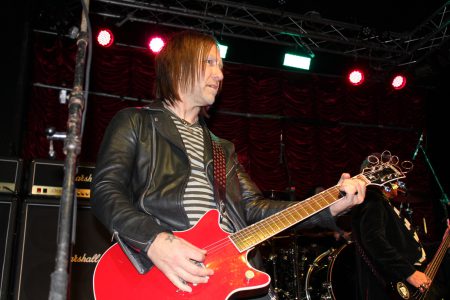 In an interview with Mitch Lafon for the Rock Talk with Mitch Lafon podcast, Buckcherry guitarist Stevie D. revealed publicly for the first time (as transcribed by Sleaze Roxx): “Right now, Kevin left and then, so what we did in the interim is, we started rehearsing with Billy Rowe from Jetboy. Great guy. Great guitar player. Also great [inaudible] and guitar builder. He owns Rock & Roll Relics. I don’t know if you’re familiar with that guitar company but yeah, he’s right in line, he’s been in the scene, in the Hollywood scene for a long time. And he likes a lot, he came up on a lot of the same music as we did. He’s the same age, same type of player and you know, he’s the type of player that’s more along the lines of say Keith Richards, Izzy Stradlin, that kind of thing. Billy Rowe — he’s got his own thing, which I think is really compatible with what Buckcherry does.”

Stevie V. added: “I think that there’s a lot of similarities in both bands [Buckcherry and Jetboy], you know what I mean? There’s a punk vibe but there’s also the rock and roll vibe, the AC/DC vibe, you know, the Rolling Stones vibe. He’s got all that underneath his hands so yeah, and he’s a great slide player. I’m looking forward to recoding with him or, and/or touring and all that stuff. We’ll just see where it goes right now. We’re in the honeymoon phase [with a big smile].”