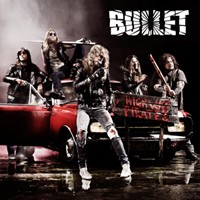 Bullet Hits #3 On The Swedish Sales Charts With ‘Highway Pirates’

On February 4th Bullet released their new album “Highway Pirates”. The album has been recieved to nothing but praise in the media, and this week the record buyers also showed their appreciation for Sweden’s most successful heavy metal act by sending the new album to #3 on the Swedish sales charts.

On February 5th a huge releaseparty was held in their hometown Vaxjo. The party was totally sold out with almost 1000 people attending, and the band delivered a classic rock show, finishing off with singer Hell Hofer sawing off the arm of a guy playing keyboards. In true Bullet spirit, specially made Bullet beer and hot dogs were served.

The overwhelming response from the media, the killer chart position, and the atmosphere on the release party held on the countryside to a countryside audience all makes it clear that Bullet has become kind of an institute – there’s something in Bullet’s music for everyone. At the moment there seems to be nothing stopping Bullet from becoming number one in the heavy metal scene. Album of the month award and Jury winner in Sweden Rock Magazine, album of the month award and Richterskala winner in Germany’s Rock Hard all point to one thing – Bullet is now getting the pay off from all the hard work they’ve put into creating music over the years.

The band is currently on a Scandinavian tour, where they aim to show also who’s number one on stage. In April they head off on a 20 date European tour with shows in Germany, Holland, England, Poland, Austria, Switzerland and Belgium (tour dates below).

“Highway Pirates” is Bullet’s third album, and the follow-up to “Heading For The Top” (2006) and “Bite The Bullet” (2008). The album is mixed by Tobias Lindell, who has worked with bands like Europe, Mustasch and Hardcore Superstar.

Bullet hit it big in 2008 with the album “Bite The Bullet” which climbed to position 3 in the Swedish charts and topped the Sleaze Roxx Top 10 which led to Bullet being one of the most booked bands in Sweden the following year. The success culminated when they made an acclaimed performance as support act to AC/DC at a sold out Ullevi Stadium in Gothenburg, Sweden.