After the release of their video for “Ain’t Enough”, Swedish hard rockers Bullet have released a video for “Fuel The Fire” in support of their latest studio album Dust To Gold, which will be released via Steamhammer / SPV on April 20, 2018. 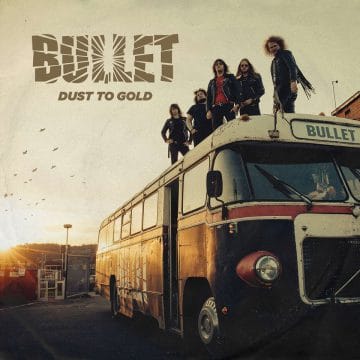 Sleaze Roxx stated the following in its review of Bullet‘s last studio album Storm Of Blades: “Hell Hofer is undeniably a love ’em or hate ’em type of vocalist, a caricature in both look and sound that could have fronted the house band from the popular Muppets franchise. He’s almost hard to take seriously, but when he starts screaming, wailing and barking every metal fan with an ounce of integrity has to stand up and take notice. He ‘sings’ with such fury that when he hits the title track’s breakneck chorus of, “Heavy metal, you will watch your heart rise,” you better believe the hairs on your body will rise as well.”

Taken from the forthcoming album “Dust To Gold” – Out April 20th, 2018.You can pre-order the album here: https://Bullet.lnk.to/DustToGoldTourdates 2018: http…