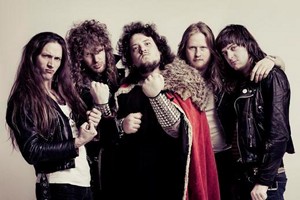 A release party for ‘Full Pull’ will take place in Vaxjo, Sweden on September 14th.