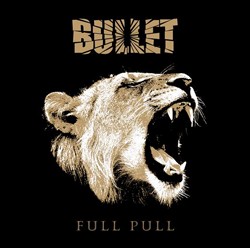 On September 14th, the new Bullet record ‘Full Pull’ will be released worldwide on Nuclear Blast Records. The CD was recorded in ‘Gutterview Recorders’ in Solna/Stockholm, along with Nicke Andersson (Entombed) and Fred Estby (Dismember).

The regular version of ‘Full Pull’ will contain eleven tracks — the limited edition digipak, as well as the vinyl version (black color and golden color, exclusive for the Nuclear Blast Mailorder) will have a bonus track. In advance of the album release, there will be a 2-track single, out on July 13th. The single will be available digitally and on vinyl, with various colours. The artwork for the single was created by Adam Zars (Enforcer).

You can order the album, with artowkr created by Gustav Sandstedt, single and merchandise at www.nuclearblast.de.

Single Tracklist:
Side A: Full Pull
Side B: Get On