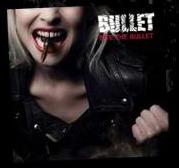 BULLET TO RELEASE ‘BITE THE BULLET’ ON SEPTEMBER 5TH:

Bullet is now more strongly united than ever and the new album “Bite the BulleT”, which is mixed by Nicke Andersson (The Hellacopters), is ready to be released on September 5th 2008 by Black Lodge Records. The album will be followed up with immense touring so get ready to BITE THE BULLET!

In the end of 2001, Hampus Klang and Hell Hofer were disappointed with what heavy music had become. In order to set things straight they started to look for other people with the same determination to play “back to the roots” heavy metal. They found the young but most talented Erik Almstrom and Gustav Hjortsjo and got started right away with the writing process and rehearsing. The band was completed with the more experienced Mr Lenny Blade, who’s kick ass attitude and many years of headbanging within the metal community brought that extra something to the band. Bullet was now seriously ready to go! In the summer of 2002 they recorded the demo “Heavy Metal Highway” in only two days, a demo that soon would become a classic in the metal underground. This was followed up with the release of the excellent mini-CD “Speeding in the Night” early 2003. After a lot of touring and constantly playing live the bands fan base grew impressively which led to the foundation of the Bullet Bastards Fan Club. Swedish record company Black Lodge took early notice in the band but a contract wasn’t signed until 2005, when Bullet finally solved their problems with former associates. In 2006 the first full length album “Heading for the Top” was released, an album that led to both chart positions and great reviews everywhere. The hard working band followed up their successful album with a lot of live performances all over Europe and is now days considered to be one of the most professional and entertaining live bands to come from Sweden. In late 2007 Lenny Blade decided to move to Thailand and therefore had to quit the band. Lenny Blade was replaced by long time friend and loyal roadie and fan club founder Adam Hector.

Watch the video for Bullet’s “Heading For The Top” below: