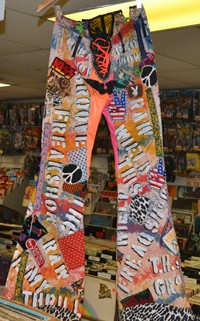 Earlier this month a couple pairs of ‘dirty and musky smelling’ stage worn pants once owned by BulletBoys frontman Marq Torien were being auctioned on eBay. Several websites erroneously reported that Torien himself was auctioning off the memorabilia, however the singer now says that isn’t the case.

“Not true!,” states Torien regarding his involvement with the eBay auctions. “These articles were stolen from me… Oh well, better than 50 cents at a yard sale. It’s under investigation!!”

The stage clothes were recently relisted on eBay, starting at the outrageous price of $6969.69 for a pair of pants worn in the BulletBoys’ “For The Love Of Money” video and a staggering $8100 for pants worn during the band’s ‘Freakshow’ period. If that isn’t enough, $4999 can get you a custom made hat worn by Torien. To check out these auctions visit this eBay link. If those auction prices seem a little steep for your wallet, the BulletBoys sell official t-shirts and guitar picks through their website at www.bulletboysofficial.com.

The BulletBoys are currently working on the follow-up to 2009’s ’10c Billionaire’, tentatively called ‘Goliath’. No other details regarding the band’s upcoming album are available.