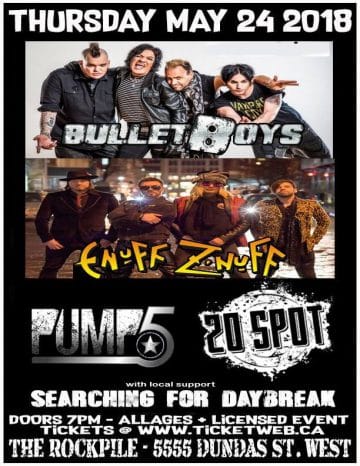 The BulletBoys and Enuff Z’Nuff along with local act Searching For Daybreak were scheduled to play at The Rockpile in Toronto, Ontario, Canada tomorrow (on May 24, 2018) but it appears that the BulletBoys had some problems crossing the USA-Canada border causing them to have to back out of the upcoming gig.

“Bullet Boys could not cross the border but we are still a go with Enuff Znuff / Pump 5/Searching For Day Break !! Door price will be reduced to $20 if you had already bought a ticket you will be given what you paid over $20 back!!”

This is not the first time that bands have had problems getting into Canada as almost exactly a year ago, Junkyard and Little Caesar had to cancel their scheduled gig at The Rockpile on May 23, 2017 due to custom and border issues.

Sleaze Roxx stated the following in its review of the BulletBoys‘ latest studio album From Out Of The Skies: “I loved the BulletBoys’ first couple of albums.  Since then, they have become a bit of a stereotype.  They’ve had some personnel changeovers… What ’80s band hasn’t? I guess the question becomes, at what point should an ’80s band kill its old self and develop a new persona? I can think of a few. As is playing out with old members of Ratt, L.A. Guns, etc. At what point should a band abandon its heritage name in order to free itself to play new material? Maybe a new band with Torien’s vocals would fare better than pretending to be old BulletBoys?”