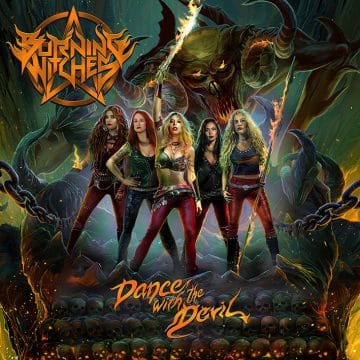 The following message was posted in part on Burning Witches‘ Facebook page back on December 18, 2019 (with slight edits)

“Hopefully you all heard the great news that our third studio album »Dance With The Devil« will be released onto the world on March 6, 2020 via Nuclear Blast!

There’s no rest for the wicked, in less than two weeks after the release of our »Wings Of Steel« EP, we are VERY proud to unveil the cover artwork for our upcoming record, which was designed by Hungarian artist Gyula Havancsák (Blind Guardian Twilight Orchestra, Accept, Powerwolf, Stratovarius, etc.), and Destruction and Gomorra guitarist Damir Eskic.

The group states, “Even before we had the album title, we knew that we wanted a cover design in the style of Ken Kelly, who did the legendary KISS, Rainbow & Manowar covers. Our vision was to show the Burning Witches, larger than life, in this fantasy art style and with a special female touch. We love to work with the Hungarian artist Gyula and told him about our plan and he basically realized our dream of a very eye catching & energetic cover design! We hope our fans will enjoy it as much as we do!”

Enjoy the silence while you can, as Burning Witches are set to unleash hell in the form of a new single to kick off 2020 the right way, stay tuned…!”

The Witches are back! With a new song featuring singer Laura!AVAILABLE DIGITALLY FROM JULY 19Get the most recent album ‘Hexenhammer’: http://nblast.de/BWHexe…