Calico was asked whether Beastö Blancö brought two or three new songs onto the recent Monsters of Rock Cruise to which she replied (as provided by SW Wall Interviews with slight edits): “So we have three so far [two were played on the Monsters of Rock Cruise]. We’re going to do a  record, but, um, this was my first time writing. So the two new songs [“Fight” and “Out of Control”] are my songs that I wrote the lyrics to.” 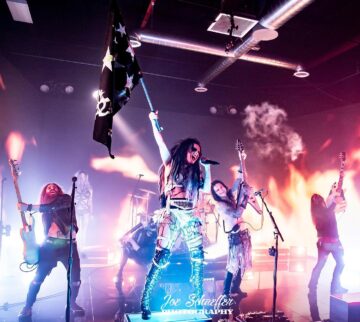 Calico added: “And so we were trying to come up with the set list and, “Fight” I sort of wrote, you know, over the pandemic where I was just like, it just, all these pieces of like things I would hear, like on the news and like weird bits of dreams.”

“And I was like, I want to write a fight anthem, like an anthem of like, okay, enough of all this chatter, enough of whatever. There’s so many of us, and so few of them, and it doesn’t even matter what side you’re on. The fact that matters, it’s us, and then like, this 1%. Right. And I was just like, what if all of us had the power to put aside our right, left, red, blue, and we all turned and looked at the people that are causing all this and went… no more.”

“And so that’s what that song was born out of. And I was so nervous to bring it in. Cause I know like I have sung songs that Chuck [Garric] has written and Chuck‘s wife, Lindsay has written, um, about me or inspired by me, but I’d never actually put, I guess you’d used to say pen to paper, mine would now be like thumb to phone, but I’m writing it out and bringing it into Keith Nelson, who was the producer, and I was just like, man, these guys are going to be like, that’s cute. And I started saying these lyrics and you know, Chris and Chuck are writing the music, Keith‘s writing the music. And before you knew it, there was this monstrous, like fight song, like this big NFL thing. And I’m going, where did that come from?”

“And so then like “Out of Darkness”, Chuck did the lyrics and I did obviously the vocals”

“And then the third one, um, will be coming out soon, but we’re working on that. That one is like, uh, sort of inspired by the movie Skeleton Key… So it’s like a sort of, um, a voodoo, uh, homage to New Orleans and Atlanta. Yeah, it’s really cool. I’m not gonna get into it, but it’s, it’s really rad.”

In terms of how many songs are actually recorded for Beastö Blancö‘s upcoming album, Calico indicated: “So we have three now. Um, we’re working on, we have the rest done just, haven’t like done the process of getting them together because you know, we also contend with, um, you know, my, my film and TV stuff, Chuck‘s Alice stuff. You know, and all the other guys are involved in, I mean Sean Sellers is in like eight bands. But, um, this is one of those things that we all decided on this trip [Monsters of Rock Cruise]. You know, we’re all sitting out on the balcony of one of our, our staterooms on the boat and we all just kind of had like, you know, a great conversation about how this year 2022, this was going to be, you know, our biggest priority.”

You can listen to the interview with Calico Cooper on SW Wall Interviews below:

Beasto Blanco performing “Out of Darkness” at Monsters of Rock Cruise in February 2022 (video from thepatester‘s YouTube page):