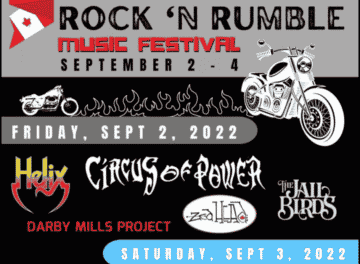 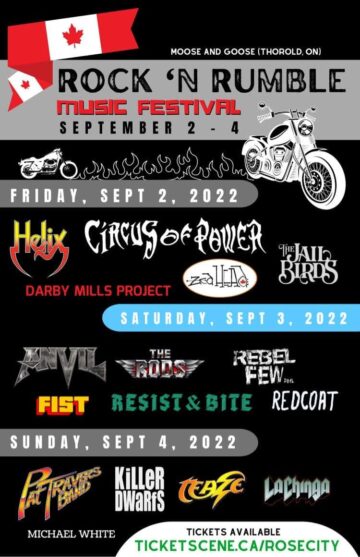 A new rock festival is upon us and will take place at the Moose & Goose in Thorold, Ontario, Canada on Labour Day Weekend from September 2 to 4, 2022. The Rock ‘N Rumble Music Festival will feature a large number of Canadian bands including Helix, the Darcy Mills Project, Anvil, the Pat Travers Band and the Killer Dwarfs but also a few American groups such as Circus of Power and Resist & Byte (featuring former Tesla guitarist Tommy Skeoch).

The Moose & Goose‘s website indicates that the venue has a capacity of over 750 people, two large bars and free parking in the downtown area. Ticket details are not yet available on the website as of press time.

The Rock ‘N Rumble Music Festival appears affiliated with Rose City Sports & Entertainment Inc., which is using the same or similar logo as Rock The Roses, the promoter who organized the inaugural Hair In The Fair Rock Festival in nearby Welland, Ontario, Canada that was supposed to take place from July 11 to 13, 2019. Sadly, that festival, which at one point featured over 26 bands including Ratt, Sebastian Bach and Vince Neil ended up not taking place with Rock The Roses announcing the event’s cancellation one week prior to the start date. Sleaze Roxx can confirm that there was at least one concert attendee that didn’t receive a refund for that cancelled festival. A private Facebook group called Rock The Roses is trying to bend me over was started at one point which seemed to mainly comprise of people discussing the difficulties in getting refunded for the cancelled festival.

The Hair In The Fair Rock Festival in July 2019 was not the only music festival to get cancelled in the province of Ontario around that time. The inaugural Roxodus Music Fest was supposed to take place in Edenvale, Ontario, Canada from July 11 to 13, 2019 with a mix of varying musical hard rock styles from headliners Kid Rock, Nickelback and Lynyrd Skynyrd to Sleaze Roxx favorites Alice Cooper, Lee Aaron and Lita Ford. About a day prior to the Rock The Roses‘ cancellation announcement, the Roxodus Music Fest announced that it was not going ahead due to the venue grounds getting too much rain.